Years ago I discovered there was some manner of mystery regarding cereal foods. That mystery: Where all those Golden Grahams go? Well I have an update now!

I don’t go into the cereal aisle very often these days, what with most varieties of cereal foods costing money, but a few days ago I was there and I noticed Golden Grahams. More specifically, it seems to have been rebranded as Golden Graham Crunch. I admit that it had been a long time since I last tried them, but these things seem exactly like regular Golden Grahams to me. Why the chunks the name has been changed, only marketing people could explain. I’m just glad to have eaten Golden Grahams again. I’ll give them Four out of Six Pieces of PDR’s Reviewing System Cake. It’ll be a few years, probably, before I think to look for them again, so they had better still be around.

So that’s one long-running PDR plot thread that has finally been settled. What will be resolved next? Stay terned!

Today I had a box of cereal and a carton of milk that both became empty at the same time! That almost never happens! Now I don’t have to go buy more milk or more cereal to use up the rest of whatever remains! Hooray!

Man lands on the sun.
He says “I guess they were wrong”
and gets shark attacked.

I’d be complaining about cleaning thousands of spam comments again this week, but I’m getting as sick of seeing myself write about that as I am about seeing me complain about work. So I won’t. And anyway, I have to go to work now. Which sucks.

So, for Christmas I was given a Superstore gift certificate for 100 dollars. Then I noticed that I apparently had to spend it all at once because if I did not, I did not get another certificate that made up the difference. I live directly above a Superstore, so it is nothing for me to just go down what I need at any given time. I don’t have to stock up. I typically spend about twenty bucks on a shopping trip. A hundred dollars? I’m not confident that I’ve ever bought that much at once. But then I figured, I have a web site where I keep track of all PDR-related minutia so when I buy a hundred dollars worth of groceries, I should take a picture of it all.

And That Is What I Did: 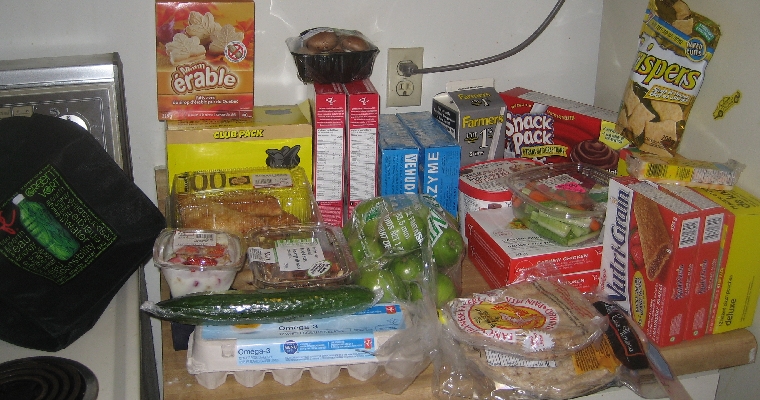 So there we go. PDR’s Most Groceries.

Now let’s see how much of it I will actually use before I begin to fear that it is going bad.

On the topic of purchasing things, I did not buy any nails last year. That may seem like an even more unimportant detail than my previous groceries, but here’s the thing: Not buying nails was my New Year’s Resolution for that year! So I did it! Hooray!

I forgot to make a resolution this year.

I guess that is all for today.

And while this is far from the worst I’ve had (I remember one last year with a bunch of coughing that lasted for a month or something) it has led to me being quite listless and foggy-brained all weekend. More so than usual even. And I’ve got used tissues everywhere that probably I should pick up. Pretty much the number one advantage of living alone is that used tissues can wait.

Of some interest, perhaps, is the fact that there is a new television show on some channel or another based off of the Walking Dead comic book. That book has entertained me for years, so I checked out the show and I was not disappointed. I’ve been a fan of zombie movies since childhood but I do admit that even before the modern enpopularizing of the undead hordes there were plenty of bad zombie movies and since then that has not changed. Because of that I am happy to actually see an ongoing show about them, which I don’t think has ever been done, and it seems to be done well. I’d probably be even happier if those two things were true about a show that wasn’t retelling a story I am already familiar with, but hey, at least licensing deals are good for the people who make the comics. They deserve a reward for having done their thing well.

And the title is correct. I just finished a bowl of cereal. Hooray.

¡Hijole! Apparently Yahoo is shutting down Geocities. I learned this from the Man on the Street section from the Onion. Since that is hardly an exact news source, I don’t have much information on the whens and wherefores, but still this news resonates with me. The first attempt of the Contains2 unit to create a website together was on geocities. It was the Adam West Batcave. When we finally found a proper hosting that pleased Marq we moved our base of absurdist comedy and minutia about our lives to www.contains2.com. For years the Batcave has just been that little placeholder with come images and avi files that was meant to redirect our hordes of fans to Contains2. But alas, now that shall die. Of course, once Contains2 didn’t please Marq any more and he let it die and won’t bring it back as no matter how much I want it and how empty its absence makes me into a pathetic wretch, so technically the Batcave outlived its progeny. Except for this site here which, though lax in content, copied the color scheme of the original as an homage.

Goodbye, good Adam West Batcave website. You’ll be missed. Sort of. Not really. But in principle or something.

Apart from that and a particularly good website for comic book annotations, I don’t imagine we’ll be losing too much that I could possibly care about. Those ads are effing annoying, so I’ll be happy to see them go.

“The people who eventually colonize the planet Uranus will be call Uranians or something. That takes the fun out of it. Oh well, at least they’ll be COLONists.”

This all reminds me, the woman who appears on the Evil Contains2 was on the cover of a magazine a month or so ago. I meant to talk about that then, when I could remember what magazine it was, but of course I’m a miserable failure so that never happened. It was the same image as still appears on Contains2 to this day, apparently. I guess it is some manner of stock image. I assume this means that evil backpack lady is conquering the world starting with web domains, moving on to magazines. Assuming she follows the logical pattern that in that order, we’ll be seeing her on cereal next. Not cereal boxes. She’ll be on the cereal itself. Her image will be made of sugar and Frosted onto Flakes soon. Don’t say I didn’t warn you. 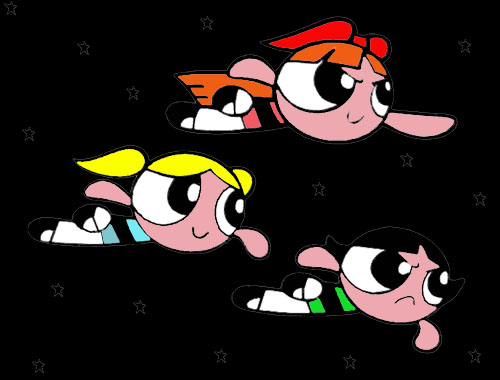 Oh, and you can still help save the world.