Somehow, even though they’ve been camped in the same spot for months now, the protagonists are still finding new stuff within walking distance. This time, they find a Terrian corpse that has been frozen for 300,000 years. Julia brings it back to camp for study, and unfortunately it brings an ancient evil with it. Creepy stuff happens around camp and then there’s a scene clearly inspired by The Thing in which they all have to find out which one of them is possessed by an ancient evil. It turns out it is Danziger, so Alonso has to fight the so-called demon in the dreamscape. The ancient evil is banished and everyone is happy.

Other stuff: 1) When Devon wants to learn more about the evil entity attacking the camp, she heads back to the village of humans we met a couple episodes back. That’s a nice little bit of continuity I wasn’t expecting and do appreciate. 2) The minor characters like Baines and Magus and Walman (the latter two being the white woman and white guy I have identified in some previous post respectively) get more focus than usual in this one. It’s mostly so that there are more suspects for us to wonder about when we aren’t sure who is possessed, but I like seeing them fleshed out even a little bit more. Also, there’s some beardy guy named Cameron I’ve never noticed before. Let’s see if he will have time to do anything important before the show ends.

Because the planet G889 has the strange metaphysical connections to dreams that it does, Devon is able to receive dream messages from her son in the future. The future version of Ulysses needs her to send little Uly on a mission, alone, to hide some of his DNA in some Terrian tunnels. Devon has to grapple with sending her little boy on a dangerous mission, but she does and Uly does fine.

We spend a lot of time in the future in this one. They give the standard line about how it is a “possible future” but nothing in this episode does anything to convince me that this isn’t the actual timeline the show is building toward (and since the show was cancelled after this season, I doubt they ever do anything to say otherwise). In the future, Uly is indeed leading a faction of Terrian rebels who are fighting against oppression by the humans. It turns out that the colonization of New Pacifica worked and the planet is now home to humans who are expanding into Terrian territory. For some reason (racism?) a lot of the parents of sick kids, who came to this planet to be healed, refused the help of the Terrians and are living with synthetic treatments. The humans are trying to “civilize” the Terrians and Future Uly and his Terrians (and Future True is with them!) are working against the humans. But then Ulysses is captured and, though Future Devon (a politician who hasn’t spoken to her son in too long) is there to rescue him, the baddies successfully take away Uly’s Terrian abilities, but luckily, because he dreamed into the past and got little Uly to stash his DNA in a safe place, he is able to get the powers back.

Other stuff: 1) There’s a subplot about True finding a Koba (again) and enlisting Yale’s aid in caring for it. It doesn’t really contribute much to the episode, but it’s nice to know that True respects Yale much more than she did back when she hated him for trying to make her learn. 2) It’s established that Terrians won’t hurt Uly because he has Terrian DNA. This checks out, given that they wouldn’t hurt Gaal because he wore a necklace of Terrian bones and Uly’s DNA was caused by the Terrians. It does interest me that this tribe of Terrians actively (at first) dislikes that Uly is a connection between their kind and humanity. I like seeing that the different tribes of Terrians can have different opinions. It adds complexity to them, as a species. 3) It is also suggested that Ulysses can do the time-travelling dream because of the emotional connection between him and his mother, and Terrians don’t have such emotional connections, so they can’t do it. 4) In this episode Devon sneaks around and doesn’t tell anyone about her dream from the future or the mission she is sending Uly on. I don’t know why. Embarrassment? Probably would have been helpful to consult Yale or Alonso in situations like this. 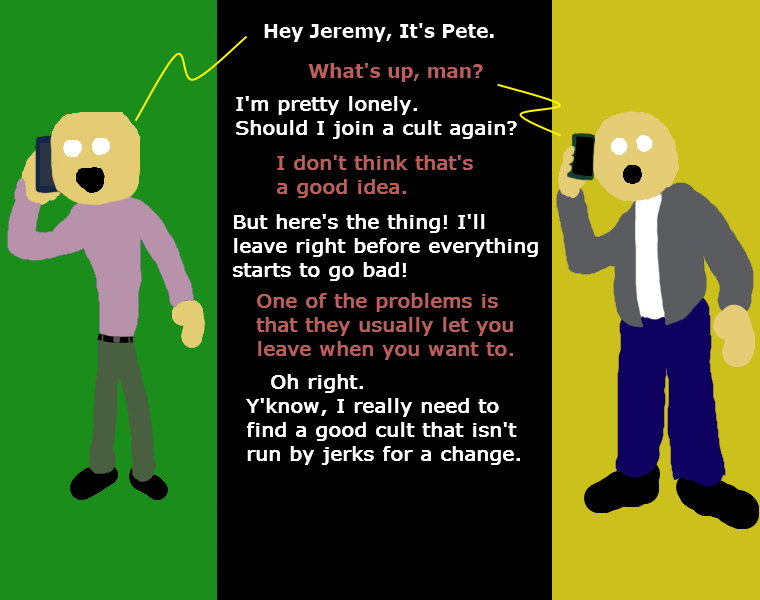 Spiders, spiders everywhere, and not a drop to drink. (That said, a Grendler does almost drink a spider in this one.)

The Eden Project people are still camped out awaiting winter to end, which is getting to annoy them because they aren’t making any progress in getting to their destination, the coastal region they’ve named New Pacifica. So when a couple of human blood-addicted Grendlers bring fresh fruit to them that must have come some long distance very quickly, the group looks into it. It turns out that there is a tunnel nearby that is part of some sort of space-folding process that can allow the Grendlers to travel all the way to the coast nearly instantly! There are complications and what ever, what with the Grendlers being addicted to human blood, but none of it really matters so let’s just jump to the end: it turns out that the magic cave actually goes the wrong way. It brings them all the way to the opposite side of the continent than they are trying to get to. With that potential travel system no use to them, it’s back to camping out the winter.

Other Stuff: 1) The “will they/won’t they” for Devon and Danziger continues in this one. She’s over her dream man from a while back, time to start having feelings for the one the audience is gonna root for. The “they will” for Alonso and Julia also continues. Good for them. 2) I do like that the crew seem to take care not to harm the spiders. Considering they’re basically always intent on taking this planet from the Terrians and Grendlers, seeing them do minor nice things to the local life helps.

The human population of G889 continues to prove itself much larger than first assumed. This time we come across a veritable village’s worth of humans living in caves. This group, made up of penal colonists and their descendants, was taken in by a tribe of Terrians who felt they had the potential to be redeemed. Also, the Terrians are once again sharing some of their mystical powers, though unlike with Mary, it isn’t the ability to travel through dirt. Apparently Terrians hibernate in the winter and, by touching their immobile forms, the humans can access the dreamscape of the Terrians and project themselves anywhere, even back to the stations around Earth.

And that ability is how Governor Shepherd has apparently met Devon decades ago in her dreams and inspired her to come to the planet in the first place. Though she didn’t believe he was a real person back then, just a dimly remembered dream, he incepted the idea that going to G889 might help heal her son Uly. Also, in dreams they fell in love, so Shepherd has been waiting for her arrival on the planet for decades.

But the thing is, he had problems during those decades. His sister Katrina, also a penal colonist, had a malfunction in her sleep chamber when sent to the planet and she aged the two decades that everyone else spent in suspended animation. This messed her up and she made Shepherd promise never to leave her. Thus, she’s not happy when Devon arrives and Shepherd considers leaving the village to go with the Eden Project. In the end, Katrina stabs Shepherd rather than lose him, and Danziger kills her by shooting her with a flaregun. The end. (Devon does still see Shepherd in her dreams.)

The paragraph of numbers: 1) To keep suspense in the episode, we get a back and forth on whether Shepherd is a good guy or not. I never found him likeable and I’m glad he won’t be sticking around. 2) In this cave village, True got to hang out with someone close to her age other than Uly for the first time since they left the stations. The culture in the caves is much different, from what she’s used to, though. For instance, they don’t consider family to be very important. True asks the kid “”Don’t you have a dad?” and he just kinda gestures to a crowd of people saying “I guess one of them must be.” 3) This village is only a few hours from where the Eden Project are camped for the winter, so it is entirely possible they encountered Mary, or even her parents back in the day. Could Gaal have wandered by these parts at some point? Why not? The Eden Project made it here in a few months from the area where Gaal was, and there were decades for it to happen. Really, humanity is all over this dumb planet.