I’m too busy for making new comics this week, so I’ve only got the Phone Guys to fall back on, but I wasn’t willing to let that be all there was, so I invested five minutes and risked my sanity by digging up something from the Contains2 archive. I believe this used to be on a secret page, but now it is here for all to see:

And here’s that Phone Guys 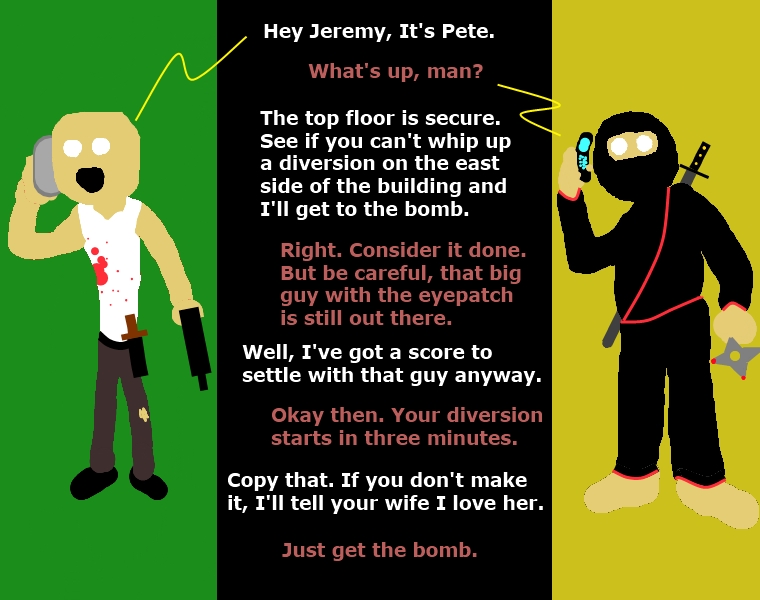 So this weekend I got a new story up and an old story up. The latter, I’m pretty sure, even predated Contains2. I have no idea why it was not already on this site. The former was based entirely around the title, which I thought up at work one time.

So…. Frogs are pretty cool… so there’s that…

I think that’s it from me today…

My word! I’ve just realized! All the suits of armor in museums and display cases all over the world are potential hiding places for humanoid alien beings to stand in and just totally spy on people who look at suits of armor. I’d suggest that we put all suits of armor under some manner X-ray or CAT scans so we would always be sure, but that would be ridiculous. Aliens would know some way to avoid being seen on those.

There are words like Color which I don’t spell with a “u” and there are words like Harbour, which I do spell with a “u” and the distinction between them is purely what I think looks better. Armor/Armour is a word which I’ve just never been able to make up my mind about, but now I think I am going to put my vote in the No U camp. Now you can all stop worrying about my thoughts on this manner.

Dogs and frogs are here
telling us why we should go
to the moon again.

So. What’s new with me, you ask? Well, I seem to have been hired as a writer for the Official Handbooks of the Marvel Universe. My work won’t show up until 2011, but when it is solicited I will show a link or whatever. This can be expected to slow down my already very slow attempts at writing for the site here, but in fact I am trying to not let this happen. Starting some time later this month or in November I will be making more attempts to Regular Updates to my webcomic section and hopefully occasional new prose stories as well. So that’s something.

In the meantime, I will put up one of my insanest old prose stories.

I guess they’ve been cracking down on downloading music and stuff in Canada. That’ll show ’em.

Incredible frog.
It can leap from here to Mars.
It’s a real leaper.

In other news, my passport application has been circulating the government system for a day or two, so soon I will have the ability to travel the world. I assume passports allow me to teleport. That seems right.