Okay, today we’ve got the construction of a railroad across Canada. They need to blow up some stuff with nitro, a highly volatile explosive, and nobody white wants that kind of risk. WHAT IS A CANADA TO DO? Wait, I know! Chinese! An immigrant worker steps up to take the risk for some danger pay and, even when the nitro blows up on him and the insensitive guy with the awesome beard says “Well, get another one”, the Chinese worker stumbles back out to happily try again! The piece ends with the man telling the story to his (I assume) grandchildren, mentioning the sheer volume of Chinese workers who died making the railroad, because they were less than he.

It’s like, sure, a lot of Chinese workers died to make the railroad, but hey, our friend here, who we’ve come to know and like, is fine, so it is all good! It turns out that this guy is like Bruce Willis in Unbreakable and he used his super durability to make the money needed to pay boat, got his wife to Canada, and started making progeny so he could tell his story. The tragic numbers of people who died doesn’t seem so bad when we look back with a survivor. In a way, this is a true fact of history. All tragedy is less terrible as time goes on, a lesson Canada needed to know. That is what we’re supposed to take from this one, right?

Anyway, to the review. Let us see now. This spot has a message of respect for a minority group and it includes an explosion and one of Canada’s apparent first superhuman citizens. All told I think I can give this one Four and a Half Pieces of PDR’s Reviewing System Cake. Is it racist that I really like the style protagonist’s hairstyle in the his youth? I’ll get out here just in case.

The nostalgic theme of my post yesterday reminded me of this old gem from Contains2, so I am now bringing it back to the Online. Someday aliens are going to use this website to recreate my mind, so I better make it as complete as possible, right? Anyway, here is “My Memories”: My memory, like […] 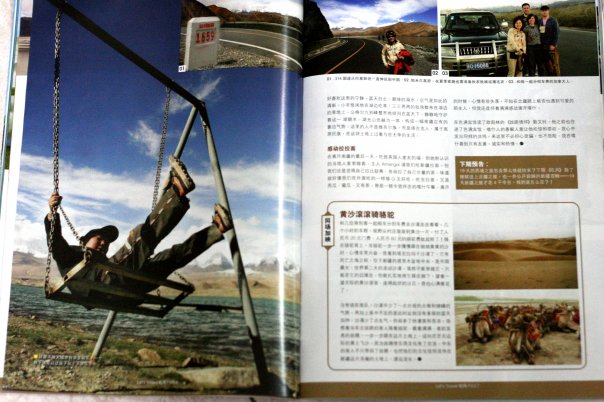 In the upper right hand corner, behind the other people? That’s me. Also, my friends Terry and Buffy are there and a friend we met in our travels who is actually responsible for us all being in this magazine. And I totally rode one of those camels too. That is, of course, from my trip to the China. Who can say what other things I have done have turned up in magazines without me ever knowing? I think maybe it should be my goal to get into a magazine on every continent. That would be swell.

In other news, I really have to wonder about the quality of the spam comments that try to get onto my site sometimes. I’m going through them as I speak and I’ve got one here that has no links and consists only of text saying “Comment1” which is hardly going to get people to know which erection pills to buy. I can only assume that the robots who do this spamming know their job better than I do, but it seems pointless. Even more pointless than thinking someone would be on my page to click the spam links if it had been included.

Man, my beloved homestreet of Quinpool Road sure has been going through some minor but frequent changes of late. Not all of them for the best. Example: At the Royal Bank up the road there was a security camera that I used to talk to when I was making ATM transactions (I offer no explanation as for why I did this), but recently they re-designed their ATMs and the camera on the ceiling next to it has been removed. I assume there is a camera in the new ATM somewhere, but I don’t know where. How am I to know which direction to ham it up? Egads, what a predicament.

Up the road: The Iranian restaurant with really awesome rice is gone, replaced by a Sushi place. And I only got to eat there twice! Granted, for all I know the sushi place has excellent rice as well, but I’m not a big sushi fan, so why exactly would I go in to find out, huh? I wouldn’t.

The travel agency I have used in my too infrequent trips around the world has moved to a street about twenty minutes away (on foot). And I never got in to thank them for how hard they worked to help me get to China. I didn’t want to go in unless I actually had a travel-related reason. Of course, with that attitude I would have to come back and thank them for the trip I set up when I thank them for the China trip and it would continue forever. Perhaps when I use them again I will, upon my return, bring them muffins as a thanks and then hopefully I won’t feel so bad about thanking them without immediately booking another trip. I’ll have to keep that in mind.

Over the Summer, three businesses directly across from me (I can see them from my window Right Now) got big fancy murals painted on them. Not bad, I admit, but one of them Vogue Optical no longer has a sign on front that identifies it as Vogue Optical. Sure it has a mural of Halifax on the side of the building which, if you pay attention, you can find some glasses painted in there. Also, I don’t know why I care if the sign is there or not. I might be getting old.

And perhaps the most confounding is a change that I noticed in my very own building just yesterday. The door in the lobby which leads to the stairwell has been replaced. Replaced by a door which looks way, way worse. I find it strange that a building which has made so much effort in making itself more presentable in the years I have lived here would purposefully replace a good door with a bad one. I figure the reasons must be one of these: The old door was damaged somehow, which I wish I had seen for my own entertainment’s sake, or they sold the old door to keep our rent down. I’m pulling for that to be the true one.

One thing, though, the store connected to the Irving is now branded as a Circle K. I don’t even remember what it used to be called, for sure. I want to say Blue Canoe, but that might have been a hallucination I had. But anyway I assume the Canadian store that was there was bought out by the American Circle K in some Corporation-Style Shenanigans. I approve of this because now I can say “Strange things are afoot at the Circle K” any time I want! Any time. And that is one of the best things I can think of.

I’ve been putting off for no good reason, but I remembered a few more things about the trip to China that might be worth mentioning (at least because it’ll get me something to write about).

The first night we stayed in Kashgar there was a concert going on about a block from the hotel we were in. It was in front of a statue of Mao. Fireworks were going off, but there was apparently no attempt to time them to the music or anything.

The next day we were walking around and we saw a big jumbotron thing showing footage from the concert. The audience was not at all rapt. They sat their in matching businessperson shirts and watched with the same level of excitement I give the average episode of one of those home remodeling shows. With all those blank faces I can’t imagine why the cameras ever bothered turning away from the performers, who did seem to be giving it their all. I’m left assuming that attendance of the event was mandatory for those chumps.

Also, though it has come up in my Facebook comments, I have to comment that Neon Lights are apparently the future over there. If someone were to visit China two years from now and tell me that the government had begun installing neon lights on the trees, I would believe it, because they’re running out of space for them on the buildings.

And finally I will mention that on my second night in Shanghai, the night it poured rain and ruined my shoes, I also got a haircut. First they rinsed the hair in one chair, then washed it in a sink in the back, then cut it in a third chair, then rinsed it again in the sink again and then I got confused. They wanted to take me to the third chair again to blow-dry my hair. I don’t dry my hair usually. I let it dry itself in the air, so I felt like I was done after the second rinsing. We did not speak the same language and it took like two minutes for me to know what was going on. At one point the guy tried just using a towel on my head as I stood. It was awkward.