The nostalgic theme of my post yesterday reminded me of this old gem from Contains2, so I am now bringing it back to the Online. Someday aliens are going to use this website to recreate my mind, so I better make it as complete as possible, right? Anyway, here is “My Memories”:

My memory, like many other components of my mind, is pitiful. Other people seem to be able to reminisce for hours at events that have happened to him, but I already can’t remember what I did two days ago. To be more precise, I’m sure that the memories are locked in there somewhere, I just can’t seem to access them with any less than a Herculean feat of mental effort.

So, for the sake of getting more content on the site, I’m going to list some of the memories I can still recall from my wonderful youth.

On at least two occasions when I lost a tooth, I thought it had rotted out and hid it. Once in my babysitter’s living room under a pillow or cushion. It was later found and explained to me that it was not rotten, but had just fallen out. On another occasion, which I’m pretty sure happened after the first one, I lost another tooth, assumed it was because of plaque buildup or whatever and threw it onto “the dirt road” which was eventually paved over. Hopefully the tooth is still there waiting to be cloned by future civilizations and used as a template for an army of Storm Trooper style soldiers. When they get out of control the good guys will believe that only the true Patrick D Ryall can defeat the clones and I will be summoned back to the realm of the living in a robotic replica of my body that can transform into a motorbike.

For the record, I only have one filling in my mouth now, and I’m not entirely convinced that there was actually a cavity there.

On that train of thought, I remember a time when my brother had a loose tooth or a toothache and I pulled it out of his mouth for him with my hand. No tying it to a doorknob for me.

I can’t really recall much about what led up to this, but I remember once being chased down the halls of my elementary school by a music teacher and hiding under a bench. Still got caught.

Lying awake in bed, trying to get to sleep has always been a big part of my night and one recurring thought that occurred to me during that time was that directly outside my bedroom window, looking in (even though the curtains were closed) was Bigfoot. I apparently assumed that Bigfoot would spend his time staring into a window that he couldn’t see in. I can’t remember if I ever looked out or not, but I assume I did and I also assume that didn’t keep me from thinking that he was there again the next time.

During another sleepless session, I made the natural assumption that there was probably a Scottish Ghost in my attic. I had no reason for this idea, but I had it nonetheless.

I remember that the Toys R Us commercials that had the jingle that went “I don’t wanna grow up, I’m a Toys R Us kid” made me sad because they made me think about my mortality and that I did indeed not want to grow up.

In elementary, we had an assembly once where I was part of a group of kids who were apparently doing a skit on bullies or something. All I can still remember is that during the skit, the guy playing the bully was supposed to fake punch me. As I recall it was a very fake punch, far from me and I supposed to fall down. But see, I’m really good at falling down and apparently was then, because after we got done there people thought I had really been punched. I think a teacher even told me that as I was “punched” both of my feet left the floor and I flew back a ways before coming down with a thud.

I can also remember being in another school thing that had me standing in a barrel and singing about sauerkraut with two or three other guys (who were also in barrels). And another play had me being an angel.

I can remember that in grade five or six I created a comic book about a superhero named Zappo. He gained his powers through some kinda electrical thing, but was not alone during that origin. There was a frog present who gained the same powers and became his sidekick/pet Zap-Frog!

Even then, I was brilliant.

One time I was wandering around all by my lonesome on the dirt road I mentioned a few memories back and I wandered into the woods near it. I’d been in these woods many times in my life, and couldn’t have really expected any problems, but after walking for a bit, I got close to another road. Looking at the buildings on this street, I noticed that one of them had an oddly shaped roof. Naturally, I assumed I was in China, and I turned and ran back the way I came.

Now, the only road that this could have been can’t be much more than five minutes from the dirt road. I guess that’s how long I assumed it took to get to China.

I remember that I really disliked math flashcards. A lot.

I remember in Grade seven or eight we did a book report on Anne Frank. Now I doubt I was a whole lot better at doing schoolwork then than I was later, but I don’t think I’d realized it yet. But the most important thing about the book report to me (even being interested in WWII as I was/am/will be) was the title page, because I got to draw on it! So I drew this awesome picture of Berlin (or whichever city Anne was holed up in) being bombed, dogfights happening above and a German plane having been shot down, and the German officer hanging out the window, his blood dripping into a nearby stream. Above it all, was the image of the Star of David intermingled with a Swastika. To me, this was an awesome image of the Second World War.

I was disappointed when I received only nine out of ten for that page and I remember that at least one other person in the class agreed with me (whoever that was, thanks for sticking up for the little guy).

Thinking back on it now however, I remember that I drew Spitfires as the Allied Forces’ planes, but I don’t think I used any particular plane for the reference on the German side. Surely this is where I erred. Shame on young me.

To finish all this off, I’m including my school picture from grade three: 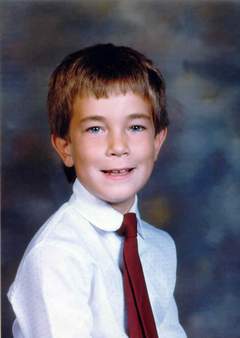 There I am. I kinda remember having trouble getting a real smile in my old school photos, so there’s no telling if I was REALLY smiling just then.

Patrick D Ryall, the D is for Soul
Originally posted on Contains2 Tuesday the 13th of August 2002.

Also, some guy called John commented this: “wow, i though i was the only one who sat there as stiff as a board, too scared to move because bigfoot was staring in MY window. I’d just ly still for what seemed like hours, but I didn’t have the safety of curtains :( I would get up enough courage to stick my face up there and look around, but even after not seeing anything, I would ly back down and fear that he was there in the window again.”