I often entertain myself with thoughts about how, after we die, we should be presented with a table of statistics about stuff we did in life. Like, how many steps we took, or how much ice cream we ate, or our how many frogs saw us. Just stats about everything. And the one I wonder about perhaps most often is what percentage of my life I’ve spent nude.

I mean, I sleep nude. I even shower nude. Honestly, if I’m home and don’t have anyone over and I’m not cooking or cleaning or cold, I’m probably naked or close to it. I just find it so comfortable. Honestly, I think I’d be classified as a nudist if I cared about a sense of community or being outside. But no, those aren’t for PDR. Just being naked.

This line of thought has also made me wonder if this is why I carry so much stuff when I’m outside. I’ve often likened it to having an inventory like an adventure game character, but maybe what I’m actually trying to do is make it so that I’m still naked in an apartment. An apartment made of the clothes I’m wearing. “See, I’ve got all this stuff, I must still be comfortable inside and hidden away from the world, right?” That must be it, right?

Anyway, this level of self-insight surely deserves some kind of honorary psychology degree.

Hey, maybe my brain is weird.

Anyway, my last few years have been downers. Let’s maybe turn that around, why not? 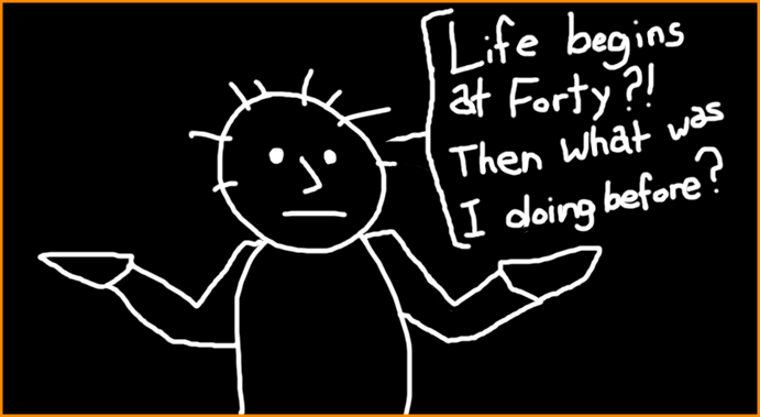 I’m sure I’ve mentioned this before, but often people are surprised the first time they hear me say a swear. Somehow I cultivate a reputation for being someone who doesn’t swear. The thing is, I’m not Someone Who Doesn’t Swear, I just happen to not swear that often. So I got to thinking about why that might be.

I do, of course, often swear casually just for what I consider comedic effect. Dropping a horrendous curse for little reason is always amusing to me. But that’s not the same thing as actually swearing. So then I got to thinking about the situation in which I am most likely to swear non-ironically: driving my car and hitting an unexpected pothole. When that happens I have noticed that I am equally likely to exclaim “fuck!” as I am to exclaim “eff!” and there is an equal amount of vitriol involved whichever I say. Both of those words are equal to me.

I think the problem is that I never got an adequate explanation for why swearing is supposed to be bad. I am not shocked when I hear a swear on television (in fact I have often not noticed). As such, I don’t get a giddy thrill from it the way, apparently, the masses do. It doesn’t feel rebellious for me to swear. They really are just words to me.

Some might think I’m missing out, but I don’t really feel like I am. You all are just too easily amused. What a bunch of cockbrains.

I was just in the shower, letting my mind wander as is my wont, and it occurred to me that it has probably been years since I have had a nosebleed. I even said aloud “I haven’t had a nosebleed in quite a while actually.”

I figured it would make sense to make a note of this, so that when I get a nosebleed next, I will know how ironic my statement was. I’ll keep you all updated!