My plans for after-work times today included getting a hamburger and returning a DVD movie I had rented to the DVD movie rental place. These hopes were dashed when I got home to find that one side of my street was without power. It was the side that has the place where I would have ordered a burger, so that means I get no burger. It is also the side of the street that holds the DVD movie rental place, but if there is a slot for dropping off DVDs while the place is closed, I have no idea where it is. I’m fairly confident that there was a slot there years ago, but since the store is open twenty-four hours a day usually, I haven’t used it and I can’t find it in the dark. And this shows that even the most mundane dreams a man can hope for that be shattered with ease by capricious fate.

But hey, at least it isn’t the side of the street with my apartment that is without power.

So, moving from the situation of Quinpool Road to that of Spring Garden road, I discovered the other day that they don’t have a Dairy Queen there anymore! What the chunks? Now how am I supposed to buy Dairy Queen on Spring Garden once or twice a year? I remember it was only last October the last time I was there.

And continuing the theme of food discussion, I saw a guy delivering pizza the other day and you know that bag they keep the pizzas inside to retain the heat? On it was printed “It’s hot or it’s not!” Is it my imagination or is that a pretty pathetic slogan? It’s not “It’s hot or it’s free!” which I could expect from a pizza joint. It is just a literal description of the states the pizza’s temperature could be. And that seems pretty pointless. Ah well. Whatever.

I really was looking forward to having a burger just now, though…

So, today we hit the Hal-Con I mentioned a few posts back. I’d be lying if I didn’t say we were a touch disappointed. As hard as it is for me just to be in a place with that many people, the location seemed rather small and crowded. And while I’m sure there must have been stuff there that would have interested me, none of it was going on while we were there. I suspect that plenty of people did enjoy it more, though. It seemed like it anyway. I’m hoping that the event was successful and that we’ve got the thing poised to become an annual event. Especially if they can get a bigger venue next year.

Also, I’d like to take a moment to complain about something I’ve seen on the Internet but today was the first time I heard about it in person: Using the term “genre” to refer to things like fantasy and science fiction. Like a website will say it has the latest news on “genre fiction” and it means it covers comics and sci-fi shows and just in general nerdy stuff. It’s downright stupid to me. Fantasy and sci-fi are genres, certainly, but to refer to them as “genre” first of all doesn’t specify what genre they are and secondly doesn’t acknowledge all the genres that those things aren’t. I am sure I have absolutely no chance of stopping this from continuing, but I can swear right here that I’m never going to play along! NEVA SURRENDA!!! 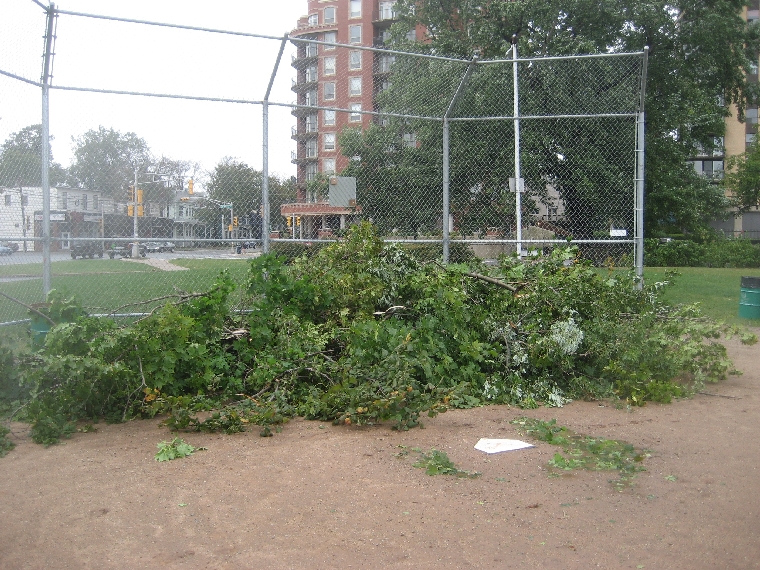 Hey look at that! A bunch of sticks!

So yesterday we got hurricaned. I lost power for eighteen hours and was Internetless for even longer. Apart from that, it was a nice warm rain and all that humidity that I’ve been hating for last month. The weather is now quite nice. Good hurricane everybody.

Also, I had a cucumber and some mayo in the fridge that I assume is no longer good. Poor wasted food. I did finish my ice cream, though.

I’m not able to sleep, but I know I should be. I was writing a Friday the Thirteenth-related story, but then I got distracted. I’ll not have time to finish it on this day so instead, I’ll write a post here. Even if I get that story done late, it’s still done, right? Anyway, I’ve been saving up things to say, so I might as well use them.

Back when I used to take cabs home from work like twice a week Casino Taxi (they’re the fast ones) used to treat me pretty well. The dispatcher lady knew me by name and would ensure that cabs came to pick me up tout de suite and they all knew where I was going. Now that I only need a cab only once a month or so, the new dispatcher never remembers me or makes smalltalk and I feel less special. Sure, they’re probably more concerned with people who use cabs more regularly, but c’mon. Where’s the love? I’ll always be loyal to Casino Taxi thanks to their old commercial, but I miss the love.

Why is it that the further a store is from my apartment, the better the ice cream it sells? I had this thing called Caramel Hat Trick the other day. It was sweet. I guess this is just a rhetorical musing. That is all.

I put together a futon over the weekend. It wasn’t hard or anything, but I still used the instructions as a guide. Doing so, I noticed that the French language bit of the manual got a step that the English and Spanish ones did not. It detailed these little rubber things I had to stick on to prevent the mattress from sliding or something.

I don’t know if this means the manual writers were so pro-French they wanted to leave the others out on the full details of what to do, or if they figured that English and Spanish speakers were smart enough to figure it out from the diagram (Like I did!) but the French were not as quick on the uptake. It is important to find out if we’re going to know who should be angry here.

And clearly someone needs to be angry.

I ordered a bunch of t-shirts a few weeks back and finally got them. The one with the Ghostbuster’s logo is especially shiny and glittery. I assume that means I accidentally ordered a girl’s shirt, but… still… it’s Ghostbusters. And being perfectly comfortable with my sexuality, I’m not going to give up having a Ghostbusters shirt just because of stereotypes against shiny clothing. So there.

And for the record, I’ve eaten like three tubs of Rocky Road ice cream this week to make up for not getting one when I wanted it that time. Oh yes, I can set goals and accomplish them. Threefold.

Little else to report at this time.