It is time for me to end the speculation on the state of my shaving. As I noted in the past, I have moved onto a five-bladed razor. Here’s the total deal on that: it is awesome. While my three-blader apparently dulled after a handful of uses, this one is still going strong and it still shears through a patch of stubble in a single swipe. Blades, man. They’re the most useful things ever.

Now that I’m travelling to various locations around the city for work, and riding various elevators, I’m noticing something: Most elevators don’t have cameras in them. The elevators of my own building have had cameras for most, if not all, of the time I have lived here. I have a tendency to talk to them when I’m riding, for my own amusement. Now that I’m in all these other buildings and I don’t get to do that, riding in elevators has become sad and lonely. If I can’t mug for a camera, how am I supposed to spend my time? Not being weird? Psh.

A watermelon
is coming to my table.
It will not leave whole.

Since I am confident that everyone everywhere is curious for updates on my shaving situation, here’s the scoop: The Three-Blade Razor I was using at last report has turned out to suck. The blades seem to have dulled after not even a month of usage (shaving about once a week), which does not compare well to the actual disposable razors I’d been using for some time prior, which got through at least as much time without giving me problems. I haven’t thrown out the three-blader just yet, because I might be able to get more use from it, but I did open up the fabled five-blader to finish off the half of my face when the three-blader couldn’t cut it. I don’t feel justified giving a review to the five-blader until it does a full face-job, but it looks good so far. And if its blades can endure, five blades may be the next thing PDR is willing to endorse.

In other news related to PDR’s jaw, my jaw has been sore all day since I woke up. My theories are thus: Either I slept on it funny, or I was attacked and punched in the face by some manner of Dream Demon. In the more likely case, the latter, the fact that I only suffer a sore jaw proves that I bested the Dream Demon because I am kickass awesome.

Okay, so, I just shaved for the first time in my life with one of those razors that has more blades (three, to be specific) and I have to say, I’m sold. It worked much better than I always assumed it would. And I actually have a five-bladed one that has been sitting in my closet for a long time that I intend to bust out when the three-blader gives up the ghost many moons from now. I thought that was important enough to be on the Internet, so I put it there.

Anyway, if anyone is designing a ten-bladed razor and they need a spokesperson, let PDR know, and he’ll do the job with aplomb. Offer only valid for this week, because after that, I’ll probably have lost interest. 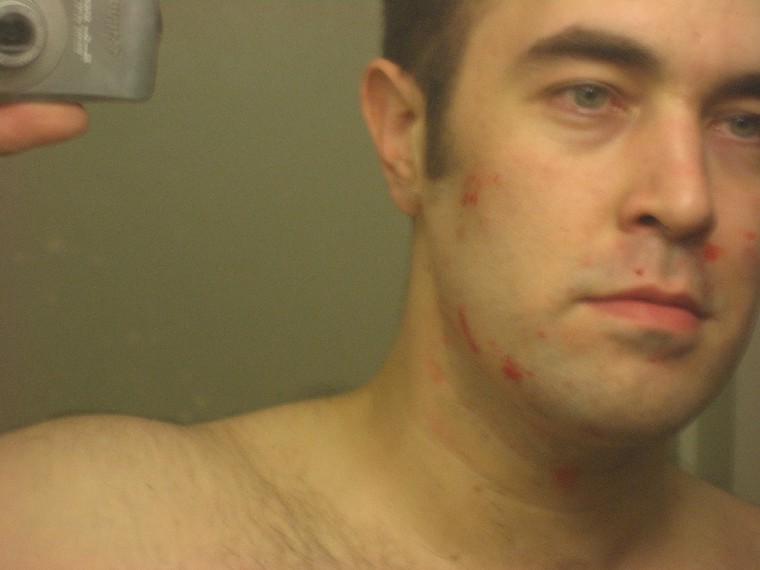 I did a haiku
in my last post on this site.
Here is another.

Also, I would like to rebut against a study I heard on the radio a week ago. They said that people who shaved regularly were more likely to be happy and say that they were living their dreams, with the implication being that shaving regularly was in part the cause for that happiness. I would say that maybe, just maybe, they have it backwards and that people who are living their dreams are more likely to shave. Just my opinion as someone who does not shave regularly and is, you can be sure, not living his dreams.

Also, what the chunks kind of study is that?