I feel that I should note for posterity that Donald Trump is also banned from this website. I mean, I don’t have the knowledge of how to actually ban anyone, but he’s unwelcome here at any rate. 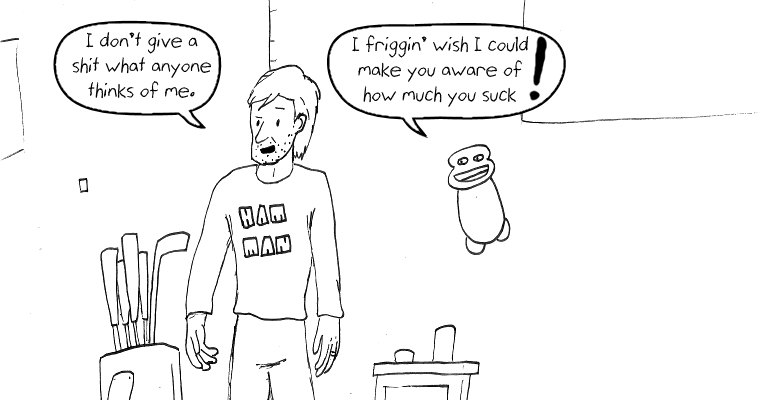 Hey everyone! It’s Little Choy! And, if the number in the file name is to be believed, it’s the 50th Little Choys comic I’ve put on this website. With this milestone and the ten year’s of continuous Phone Guys earlier this month, this has been a banner year for exceedingly dumb comics on the Book of PDR.

But, of course, these fifty Little Choy comics are not nearly all of them. I drew these in textbooks and on school desks as a teenager. I drew them on random scraps of paper. Back when I doodled more regularly, this was a regular go-to for me. But now I do it so rarely, and only when I feel like I need something easy to put on this site. Honestly, I feel like fifty Little Choys is probably a good place to stop. Unless I feel compelled to do so naturally, I think I’ve got enough Choys on here to make my point.

What point is that? I dunno. I guess I think it’s funny when a person says something inane and then a weird little floating thing insults them. But those insults aren’t as randomly chosen as Choy’s victims. I’ve come to know Little Choy very well and it’s clear that Choy doesn’t insult your appearance, or your class, or anything like that. Choy only wants you to know that you are stupid and your life is meaningless. That’s what Little Choy wants you to know. That you suck.

Hey look, a new form of content has begun on the Book of PDR. It’s Adam: The Beekeeper Chronicles. This is going to continue the story of Adam, the Beekeeper who played a minor but pivotal role in Secret Government Robots, as well as some of the other cast members from that comic. But now they’re in prose! Neat!

Specifically, I’m going to do chapters for this as drabbles, the type of story which is exactly one hundred words long. Easy to read, right? Everyone wins. I figure I’ll do a hundred chapters of it, then see where I feel like going from there.

I noticed that the last page of Secret Government Robots has finally flopped up onto the site. That webcomic is now entirely done. Neat.

Gonna have to change the design of the site around now, I suppose. And also, get more things going up.

The year of 2016 is coming to a close and the Dark Lord Char’Nagh is here to demolish what came before and hopefully replace it with something better. Hail the Darkness of Char’Nagh!

“This is definitely the year that Secret Government Robots will be ending,” I wrote last year. Oops. I am afraid that after the monetary issues that started my year, I fell out of the habit of doing the comic, and never really got back into it. It’s been a rough year in many ways and I haven’t been as productive as I would have liked. The only real upside, if it can be called that, is that it seems like it has been a rough year for a lot of people, so if nothing else, I am kind of in the zeitgeist. That counts for something, right? Right?

Anyway, I’m going to hopefully get SecGov done for real this year. I’ve actually got about fifty pages pencilled that I “just” need to scan, ink, color, and letter. But that fifty is, I estimate, only about half of what is left. But once I start getting them online, they’ll all follow. Otherwise, what creative energies I did expend in 2016 have been on projects that don’t really have any immediate payoff (as well as the creation of a host of alien species that nobody but me has any interest in). Ideally, in 2017 I will get SecGov done so that, if nothing else, I can feel less guilty when I work on other things. I’ve said it before, but it is a good thing I don’t have an audience craving this stuff or I’d feel even more pressure.

Potatoes for sale!
Get your fresh potatoes here!
But them, you morons!

In other news, the little add-on thing that was putting my Twitter posts onto this site seems to have ceased to function and I have no idea how to replace it. Without those little blurbs, this site seems to have even less content than I can condone. I guess I will have to start to try doing little post here now and then too. Geez. So much work.