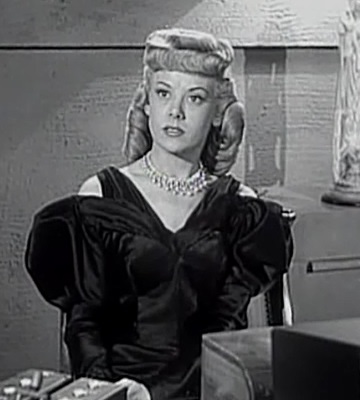 The Scarlet Widow is an elderly woman who runs a crime syndicate. She’s ruthless and innovative and was rightly called the most dangerous woman in the world. I like her and think she should be brought back.

To make Metropolis a seedy-enough place to house the corruption our intrepid reporters fight against, you’re gonna need a crime syndicate or two. Sure, there’s been a few criminal organizations in Superman’s history, some worth using (I’ll probably write about Intergang someday), but the Scarlet Widow is my favourite and since I am always right, that means we have to bring back the Scarlet Widow.

The Scarlet Widow appeared in multiple episodes of the 40s Superman radio show. As I said, she was an elderly woman there, and I liked that. She was Ma Gnucci and Mr. Burns combined with a dash of spider motif. When the movie serials adapted her story for a visual medium, I guess they decided that you can’t let old people be seen, so they cast an attractive younger woman as seen in the picture accompanying this post (and also they called her “The Spider Lady” just to dumb things down, I guess). The internet also tells me that a version of the Superman stage musical also brought the Scarlet Widow back decades later, but I have found limited information on that. In any case, younger Scarlet Widows don’t do it for me. Give me an elderly evil mob boss behind the scenes making Metropolis more dangerous for Superman and his friends. With a criminal career as long as hers, she’d definitely have a history of striking against Daily Planet reporters like Perry White, and she could be behind the creation of a few of the lesser super-criminals who have cropped up since Superman’s arrival.

I’ve finished writing essays for the year, and I think I’ve only got three days of classes left. After next week, all that remains is the exams.

Exams have got to be my least favorite element of schooling, so I’m not happy that they’re what’s left. It is especially sad because the classes that remain aren’t about teaching any more. It’s all about how to study for exams, and how to pass exams, and all that stuff that I don’t care much about. Basically, from a PDR point of view, school is over and all that’s left is the annoying unimportant stuff they make us do so they can feel like they’re doing something.

My plan was to take some classes over the Summer, but reality is that I can’t currently afford any classes. With that in mind, I’m kinda going to have to make up Summer as I go, so let’s see what happens. Hopefully I will have a lot of time for doing things on the site, here.

(Edited in later in the day): Looks like the Radiolab polling has finished and I felt like I should include the results for posterity. Shrewdinger wins.

Well, the results are in and my suggestion did not make it to the final round of that ancient mammal-naming contest. I expected it to happen, but it is still a shame.

I’m still a big fan of ancient mammals, though. I’m not gonna let this bring me down. Ancient mammals are great. I’ll have to find some other one to name someday.

I suppose that I should make note that I suggested a name for an ancestor of humanity and that my suggestion is, as of this writing, in the running to win a Radiolab contest. There were over a thousand suggestions to begin with and somehow “Grandmammal” has made it into the final four.

I think I can safely say that if I had actually bothered to put any thought into my suggestion, instead of just firing off the first thing that occurred to me, it would never have made it this far.