The first car I ever owned is not functional any longer. Goodbye to a hard-working car. 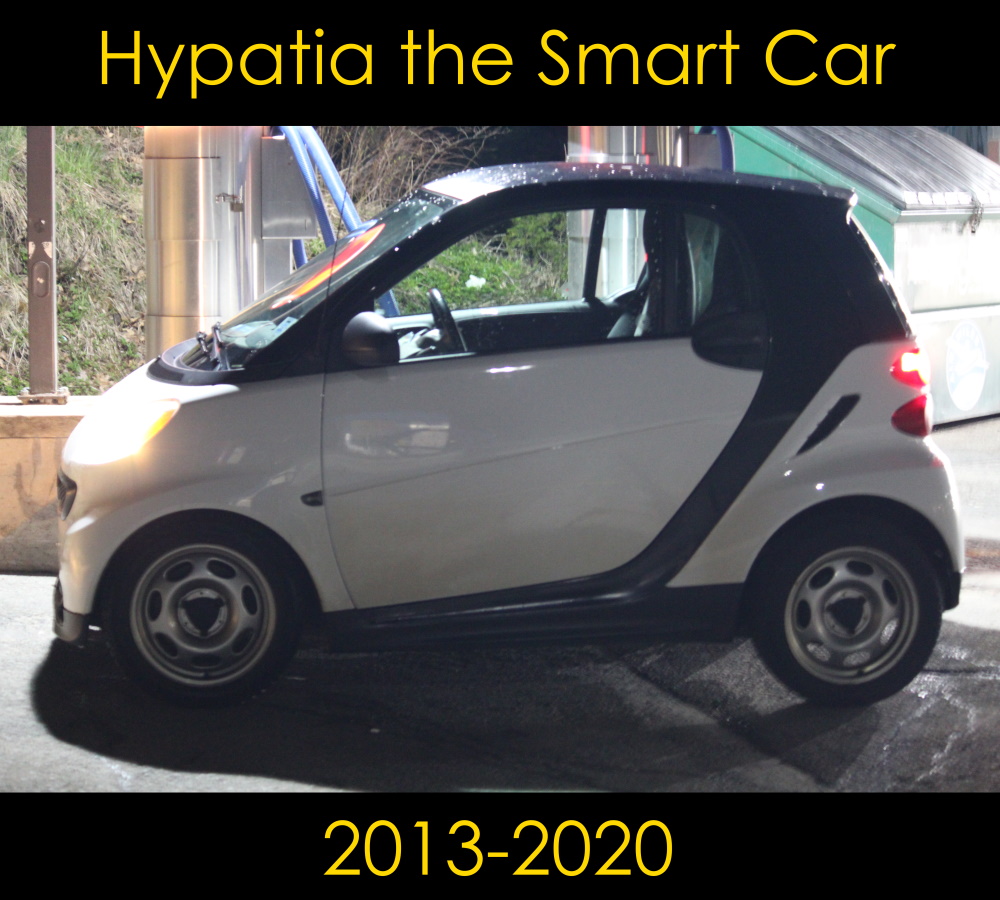 I’m sure I’ve mentioned this before, but often people are surprised the first time they hear me say a swear. Somehow I cultivate a reputation for being someone who doesn’t swear. The thing is, I’m not Someone Who Doesn’t Swear, I just happen to not swear that often. So I got to thinking about why that might be.

I do, of course, often swear casually just for what I consider comedic effect. Dropping a horrendous curse for little reason is always amusing to me. But that’s not the same thing as actually swearing. So then I got to thinking about the situation in which I am most likely to swear non-ironically: driving my car and hitting an unexpected pothole. When that happens I have noticed that I am equally likely to exclaim “fuck!” as I am to exclaim “eff!” and there is an equal amount of vitriol involved whichever I say. Both of those words are equal to me.

I think the problem is that I never got an adequate explanation for why swearing is supposed to be bad. I am not shocked when I hear a swear on television (in fact I have often not noticed). As such, I don’t get a giddy thrill from it the way, apparently, the masses do. It doesn’t feel rebellious for me to swear. They really are just words to me.

Some might think I’m missing out, but I don’t really feel like I am. You all are just too easily amused. What a bunch of cockbrains.

Today I got my first parking ticket! And oddly, for someone currently employed in the food delivery industry and therefore making several illegal park jobs every night, this happened on my own time. I went into a store for roughly three minutes, only for the store guy to point out the person writing me a ticket. The ticket was issued at 4:21 pm and apparently at 4:00 pm that space becomes a no parking zone. I assume this is a thing to help out in rush hour. Rush hour is one of the many reasons people who go out in daytime on a regular basis are idiots.

Anyway, this is all fair enough. I get away with plenty of parking I shouldn’t at night, so I can take a hit, especially since it was only $25. But as I continued on my way, I noticed that one of the places at which I can pay off the ticked was on my route. I could stop off there and get the ticket paid a mere ten minutes after it had been issued! That would be fun!

I got to the place. There was no parking. There was, however, a truck parked in a No Parking zone. “Hey, if it’s good enough for that guy” I say to myself…

I run inside, but the place has apparently closed about half an hour earlier, so I run back to the car. Parking officials are there already writing me another ticket. Luckily for me, when they see me coming they decide to let me off the hook, so I avoided the humiliation of getting a parking ticket while paying for a parking ticket. But just barely.

Anyway, I don’t have these problem at night. All you diurnal people have too many rules. I paid the thing online and we’re all good now.

(Also, I’m counting this as a post worthy of the PDR vs The Police tag. It’s my site so I can do that if I want to.)

Probably time for an update. As I believe I mentioned last time, I have had to deal with various things of a monetary nature. The current status is that, for the first time in my life, I own a car and I own a flat screen television. The latter was free, so that was nice, but it turns out that cars are expensive and owning it is not immediately improving my economic situation. Hopefully this is one of those “in the long run” deals. Still, I’ve acquired two of the material goods that capitalism tells me should make me happy, right? (Side note: Do televisions get channels without cable, or is this thing just going to work with my laptop?)

If the site had an audience, they’d be noticing that SecGov has been stuck for a while. It’s just that with all the things I’ve had on the go, it has been the lowest priority. Hopefully once I get back into the swing of it, I’ll be able to push through and end it once and for all, because then I’ll have one less thing on the go and that’ll be nice.