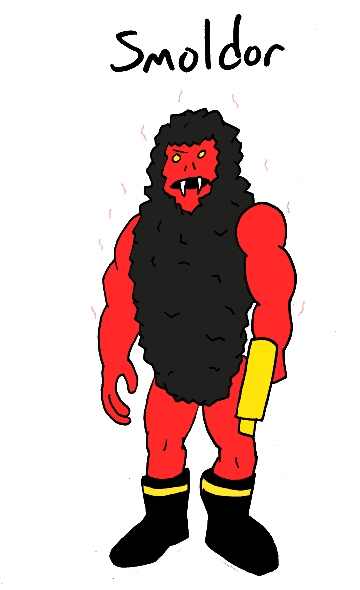 Smoldor is a magical creature made from a mass of burning coal. Created by an evil pollution-loving corporation to fight CommandOak and the Forest Force. Smoldor is a strong, but dim-witted guy, but his burning touch is a formidable threat (especially to enemies made of wood) so he can’t be written off entirely. Still, most of the time he just makes stupid remarks and gets belittled by his superiors. It’s possible Smoldor might not actually be such a bad guy, he may actually just not know any better.

Good old Smoldor is just me continuing to grow the Forest Force’s resemblance to the 1980s cartoon franchises I liked as a kid. Every good villain in those days had at least one idiotic henchman. I have not actually designed any of the evil corporate people that Smoldor works for yet, but we do know that occasionally he would work alongside Mr. Slime. Also worth noting: The Forest Force are living tree people. It is my (admittedly limited) understanding that coal can be made from wood. How did the evil corporation create a living coal person? The answer may be very dark. 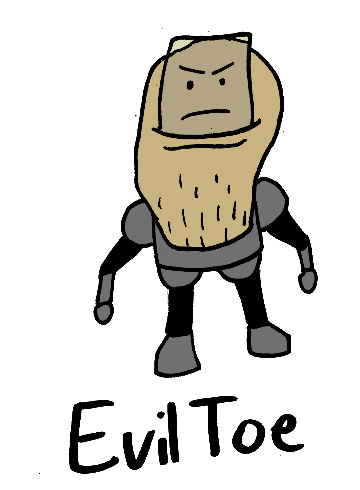 The wizard Mak Skyruiner was a terrorist known all over the world. He and his forces sowed chaos with numerous bombing attacks on the capital city of the island kingdom Islopia. The superhuman law enforcers of Islopia (including the Beam) tracked Mak down and, in a violent climactic showdown, seemingly destroyed the wizard once and for all.

But the wizard was not entirely destroyed. A single toe remained, and was not noticed by the good guys. Having transferred enough of his essence into that solitary digit to remain conscious, the wizard used what magic power he had remaining to develop a small mechanical body to keep himself mobile. While he may now be much, much less powerful than he was, he is still alive, and where there is life, there is the opportunity for this Evil Toe to rebuild himself. And, perhaps more importantly, to cause whatever mischief he can to make things harder for the good guys.