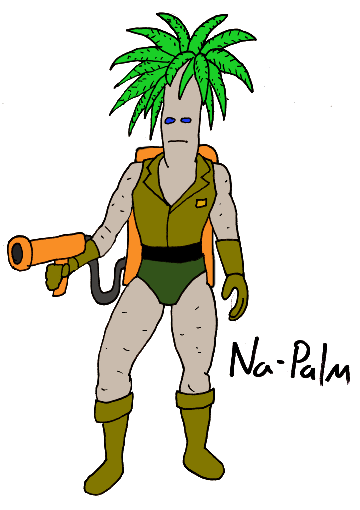 The Forest Force is a militant team of humanoid tree-people, led by CommandOak, who protect the magic forest of Arborika. Na-Palm is the team’s incendiary weapons expert. It’s true that she can be a bit hotheaded, but since her weapon of choice is literal fire and her task is to protect a magical forest, she reigns in her temper as best she can. She generally serves as the second-in-command to CommandOak.

Obviously this is just a continuation of the Forest Force concept that I started when I make CommandOak. As with him, I’ve tried to keep true to the general appearance of He-Man figures. If I was keeping entirely true to that kind of show, I expect that Na-Palm here would be the only woman on the team. If I ever bothered to flesh out the group more than this, though, I expect I’d try to do better than that. I’ve also tried not to sexualize her much, but I’m sure the Internet has people who wanna bone trees anyway. 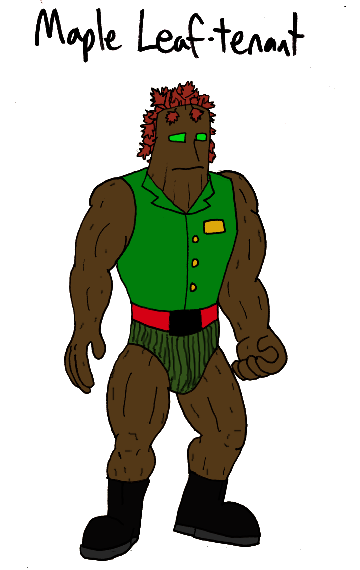 The Maple Leaf-tenant (they call him Maple for short) is the Forest Force’s big guy. He’s not all that bright, but he’s good at taking orders and he’s strong. His weapon choice is a big rocket launcher, but he can also do a lot of damage even unarmed. Most frequently, he is stationed as the guard at the Great Treecastle, the sacred base of the Forest Force.

I picture the Great Treecastle as a big castle growing out of a great big tree, obviously, that is essentially the Forest Force’s playset, like Castle Greyskull to the Masters of the Universe. I’ll grant that a castle might look sort of out of place for a military group, but throw some machine guns and it’ll look cool enough that it doesn’t matter.

Maybe someday I’ll draw more of these guys? Doesn’t seem urgent though. I suppose maybe I could give a shot at doing some of their enemies.