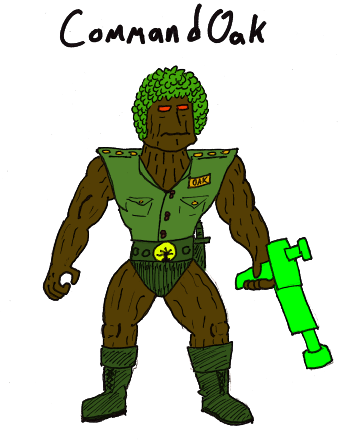 There is a secret magical forest called Arborika, and an evil pollution-loving corporation want to get in there and steal all the magic wood. But luckily for Arborika, there are CommandOak and the Forest Force, magic tree-people who fight the evil corporation’s weekly schemes.

Other members of the Forest Force would include the Maple Leaftenant, Na-Palm, Brigadier Birch, and so on.

Here, I wanted to tap into 80s toy-style heroes so I combined the aesthetics (and terrible name schemes) of He-Man with the military trapping of G.I. Joe and then threw trees into the mix. In case it isn’t obvious, he’s got bark for skin, leaves for hair, and those are supposed to be acorn buttons on his shirt. Also, I picture that gun being bright orange.

(The Captain Planet-style villains are, I admit, more a 90s thing than an 80s one, but whatever, shut up.) 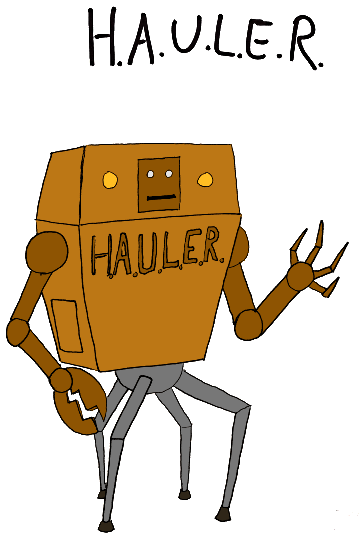 The Hundred-Armed Urban Law-Enforcing Robot was designed to meet the needs of a world where superhuman criminals are unfortunately common. While strong and durable, the real feature of HAULER are the side panels that lead to micro-storage units containing a plethora of different arm attachments for a myriad of different uses. Claws, grappling hooks, flame throwers, various restraints, and a multitude of weapons. This is one robot who always has something… up its sleeve. (No apologies)

“Hey PDR,” said nobody ever, “you need to design another robot!” HAULER would be a non-sentient robot, though. Most of the time in comics, it’s taken for granted that the robots can think and feel and laugh and love. This is an exception because there should be exceptions. A story about HAULER would be about have to be about the people who control him, probably from some remote back at police headquarters, rather than about the robot himself. Some sort of procedural soap opera deal, I guess.