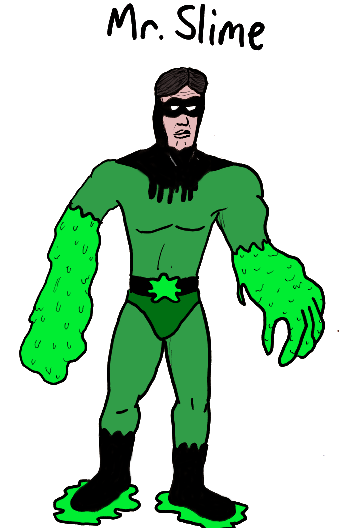 While making an attempted robbery of a chemical plant’s payroll office, Deke Sleeman happened to be spotted by a particularly bitter security guard. The guard chased the crook, who fell over a safety railing into a vat of toxic waste. Sleeman seemed to dissolve, and the company decided it would be best to keep the authorities in the dark about what had happened. No need to draw unwanted attention. A few weeks later, a mass of ooze pulled itself out of the vat of chemicals and attacked the security guard, leaving him dead.

In time, Sleeman was able to pull himself into a shape resembling his former human self. He now had the ability to transform himself into slime, simply ooze or deadly acidic, and he was noticed by the owner of the chemical plant. He could use a man of those unique talents for certain unconventional jobs. Sleeman was willing.

I drew Mr. Slime one time years ago, at work I think, and just left him among my notes. I liked the idea and the look, a pretty conventional villain I thought, so it seems perfect to break him out now. I think that Mr. Slime could do double duty in my superhero universes, fighting regular superheroes like the Beam as a crook following the Hydro-Man archetype, but also he would be on the team of pollution-themed villains who fight CommandOak. Let’s get the most out of our slime guy. 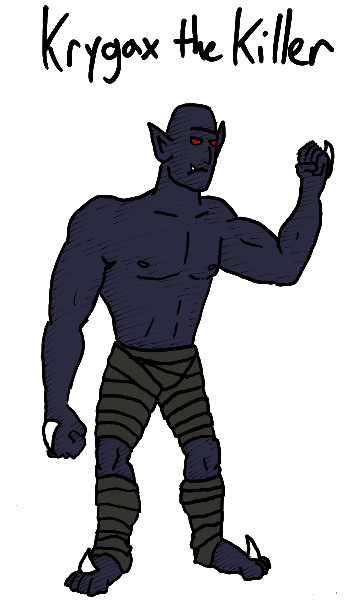 Krygax was created by the mystical Night Fellows to serve as their perfect killing machine. They did a good job with creating a killer, but were not as careful as they should have been with creating a loyal servant. Krygax will serve the Night Fellows as long as it allows him to kill, but given any bit of freedom and any bit of boredom and he will find new victims of his own choosing. The Night Fellows, worshippers of a demon called Karaksus the Uncontrollable, are now, ironically, burdened by an uncontrollable minion. Still, no matter how hard it is to wrangle the mystical assassin, he is useful as a weapon against the Night Fellows’ sworn enemy, Skullserpent.

Like Mr. Slime, a sketch of this character has been in my filing cabinet for years. The difference here is that, as far as I know now, I had no idea of who he was when I drew him. I certainly never gave him a name or any kind of backstory. He was just a doodle. But now he’s a guy on my website thing. No idea gets left behind.