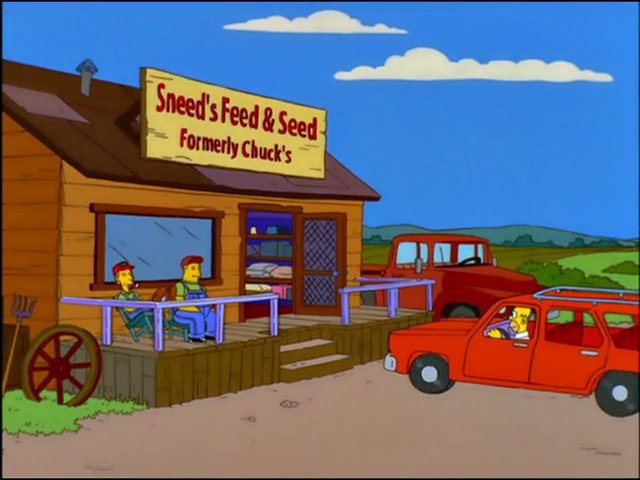 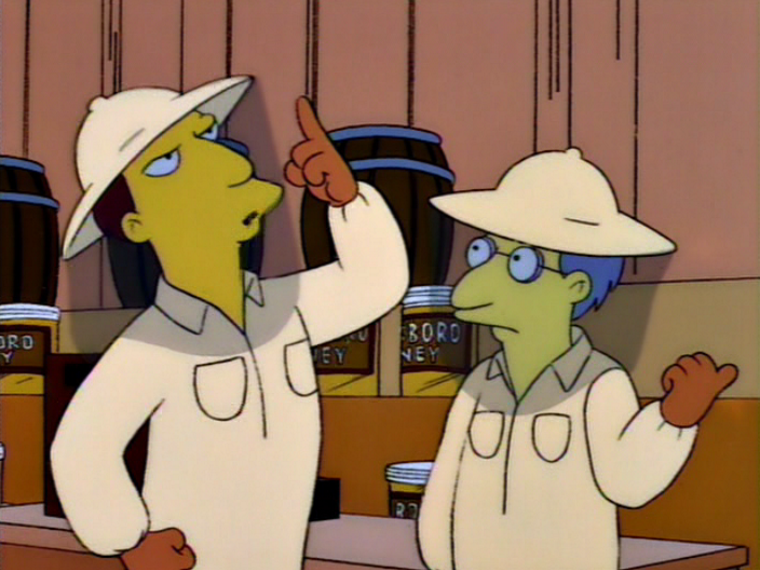 The Simpsons was a pretty great show. Season Six of the Simpsons was smack in the middle of its best years. Lisa’s Rival was a good episode. Homer getting a pile of sugar was an excellent subplot. That’s when the Simpsons got Beekeepers. 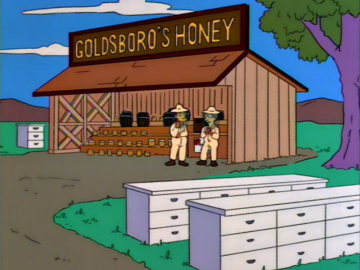 Homer gives a rousing speech about why it his right and his duty to protect and sell his pile of sugar when suddenly a swarm of bees descends upon it. He tries to fight them, but can’t win (“Ow! They’re defending themselves somehow!”). Soon the local beekeepers notice that their apiary is oddly quiet (“No noise… suggests no bees”). Seeing one lone bee, so they follow it in their “beemobile”, which is actually a Chevy, and track the bee to Homer and his pile. They assume that Homer has taken their bees on purpose and are prepared to pay him to get back their swarm, but then it starts to rain, the pile melts, and the bees head home. Homer gets nothing for all his hard work.

These two are pretty great. The taller one (voiced by Hank Azaria) is very much based on Adam West’s Batman. The shorter one (Harry Shearer) is the perfect compliment to the other. It astounds me that, on a show like the Simpsons, these guys never came back. I admit, there’s a decade and a half of Simpsons that I haven’t seen, but from what I can tell from the Internet these guys have never so much as appeared in a crowd scene or anything. They don’t even have a page on the Simpsons Wikia site. What the chunks?

I can only assume the beekeepers themselves didn’t want to be seen. They don’t really display any special powers, except perhaps being able to follow a single bee while they’re in a car, so maybe the power they did have was keeping hidden. They have no preternatural control over their bees at all. Still, being given a Batman-reference for a voice is an indication of badassness if nothing else is. They do seem fairly safe from Beekeeper Rage, though. Even as think Homer is a criminal genius they don’t get very angry at him. They almost seem to respect his cunning.

Incidentally, the name of their company, Goldsboro Honey, is a reference to a song called “Honey” by a guy called Bobby Goldsboro that there is, apparently. I learned that thanks to the Internet.

While writing this I learned that there’s an episode in the twentieth season that deals with beekeeping, but these guys aren’t even in there. I’ll have to deal with that one someday way, way down the line.

So, I have seen articles in the newspapers that lead me to indicate that the Simpsons will be drawing to an end. This is an event which has been a long time coming, but will still be of note because back in my formative years that was The Show for PDR. For more than a decade that was the show that taught me how to realize stupidity in the world around me and laugh at it. I own the DVDs of those first ten seasons or so and I never tire of rewatching them. Sure, I stopped relating to the show eventually, but with a decade-long run of amusing me, I can’t complain. So now that it is wrapping up… wait, what’s that? Oh, the article says there could still be two or three years? What is with this show? Stop it already.

For the record the first article I saw on the topic had a headline telling viewers now to “have a cow” so I am going to choose to believe that they have had that headline ready for about twenty years and were just waiting for the opportunity to use it.

I have also seen articles on the Internet telling me that a new season of Arrested Development is going to happen. That right there, is awesome times news.

SIDEBURNS! The single most important aspect of this Canadian Heritage Minute is the sideburns. Ostensibly it is about Jenny Trout, who was the first woman licensed to practice medicine in Canada and the hassles she had to put up with in medical school from all the men who felt that women had no place there. I mean sure, it is good that women can be doctors and whatnot, but check out the sideburns! Especially on the Doctor McFarland guy. Those are things of beauty. I also love the idea of smacking desks and books as a means of showing disapproval. It’s so stupid that I could never take it seriously.

But the failing of this commercial is that it just doesn’t have any great quotable lines. There’s just nothing there that is fun to say. I do have to wonder about the one guy in the class who gets the most face time the others. Why does she throw the leaf at that one guy? Does she know that the camera has featured him more prominently? Is he like the boss of the misogynist students? Does he have some history with Mrs. Trout? There’s potential here for a deeper story. If only these commercials had sequels we could find out what happens when he tried to assassinate Trout only to get thrown out a window. And then she’d say “There’s no place for dumbasses in this school!” Now that’s quotable history.

Also, it occurs to me that there is totally a picture of a penis in this commercial. I can’t remember ever laughing about that as a child. Was I not immature enough? I wonder if they’re still allowed to air that. I’ve heard that they aren’t even allowed to show Homer Simpson’s butt in new episodes, but that’s America so who knows.

Anyway, I’m only giving this one Three out of Six Pieces of PDR’s Reviewing System Cake. And most of that is for those sideburns.

Yesterday, Saturday, I was awakened after only a three hours sleep by two telemarketing-type calls. This was around Nine and Nine Thirty in the morning. I thought that even normal Day People liked to sleep in on Saturday mornings. Is that not too early for them to be calling? It completely messed me up in any case.

I did enjoy some of my unfortunate waking hours watching two discs worth of episodes of the sixth season of the Simpsons and it is nice to be reminded of just how awesome that show was back when it was awesome. It is hard to believe that those episodes were like a decade and a half old now. Seriously, they should be feeding that stuff to the new kids growing up today. By force if necessary.

And now, because I can, here’s a story:

There was an astronaut called Deke Manly who was always getting drunk and getting in fights with horses. Eventually none of the horses in town would even let him get close to them. The scientists who he worked with didn’t know about his drunken horsefighting, so when they happened to notice that, no matter what, horses would not come within twenty feet of Deke, they naturally assumed that Deke had some sort of horse-repelling field. As it turned out some horses had stolen a spaceship back in ’79 and colonized a planet where they were now massing their forces to return to Earth as conquerors. The scientists shot Deke into space and landed him on the Horse Planet figuring this would put the Horse Armies into disarray. Deke had no horse repelling field, so instead the horses just arrested him and threatened to kill him if Earth didn’t surrender. Earth didn’t surrender. For his last request Deke was given some booze and got so drunk that he had no problem taking on all the Horse colonists. After he’d clobbered all the Horses he didn’t know how to get home, so he brought all the Horses to the hospital and helped them get back to full health. Then they were all friends and the Horse Invasion of Earth was called off and Deke was finally cured of his drunken tendency to fight horses. The end.