Usually on my Super Sunday post I try to create some superhero that would fill some hole I see in our action heroes of the day, or I just make something up on the spot, probably based around a terrible name. Well this month I am doing something different: Last year, before the Super Sunday even began, I brought you a story about Justice-Man, a hero I made up back in Junior High times. Well the thing is that Justice-Man had a large supporting cast, and have been stuck in my notes for more than a decade. This month we’re going to have four Super Sundays dedicated to the friends of Justice-Man. (Some of them, however, may fill holes in society’s current crop of action heroes of the day, and we’re almost guaranteed some terrible names.) 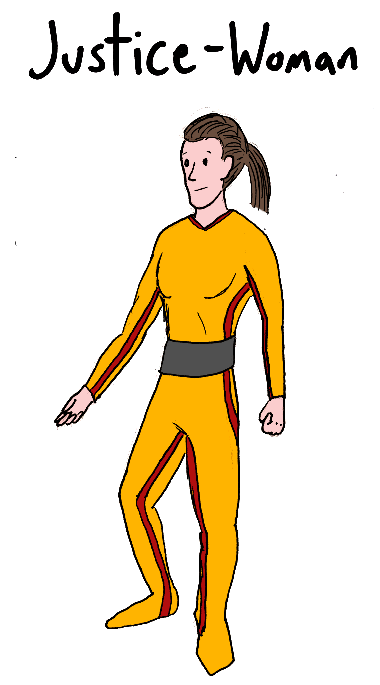 Kimberly Mills was the only daughter of a former superhero, but before she was old enough to realize that, her father adopted a troubled teenage boy. The boy had been born and created to be an assassin and had only recently been freed from the organization that treated him as a weapon. While there was some concern about young Kim being in such close proximity to a former killer, but it turned out that she was a humanizing influence on Alex. They became very close. Eventually Alex Mills would grow up to be the superhero Justice-Man and Kim, who inherited her father’s super-speed powers, became Justice-Girl, hoping to be a sidekick to her brother. While Alex wanted to keep Kim out of danger, her ability to come along and help him out before he even sees her meant that she was hard to stop. Eventually, though, Kim had to leave for university. Her super-speed meant that she could still go to Toronto to visit her brother on occasion, but eventually she decided that it would be easier to just do crimefighting on her own. That continues to this day when, as Justice-Woman, she is one of the world’s foremost superheroes working as the leader of her own superhero team.

So anyway, I wanted to say that Justice-Woman was something of a change of pace from most girl versions of more well-known superheroes. She has her own set of powers, her own career, and doesn’t exist just to work alongside her brother. I wanted to say that, but when I consulted my notes, it turned out that I didn’t even have a first name written down for her. I guess that I can excuse young me for ignoring Justice-Woman’s development, I was obsessed with Justice-Man and not really trying to use him for social commentary, but I have to say I could do a better job of telling stories for her today than I did then. 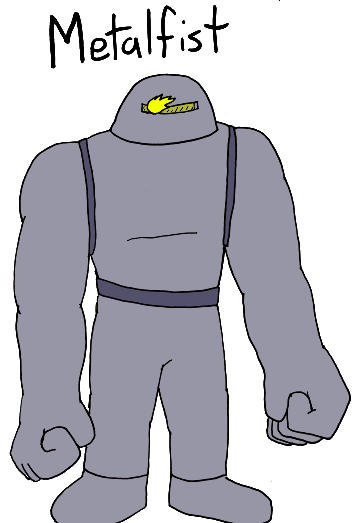 Hugh Duval has a big suit of armor that gives him superhuman strength and the ability to shoot energy burst from his eye-slot. He uses this to fight crime alongside Justice-Man.

Metalfist is an oddity. I’ve drawn him into pretty much every sketch I ever did of Justice-Man’s friends, he exists on every list I made of that group. I have no information about the guy. If I ever did have an idea about who this guy was beyond being a friend of J-Man, I apparently didn’t write it down. To tell the truth, I feel like maybe I just drew him into my crowd scenes becaus he was easy to draw. And considering that his suit of armor there is, apparently, covering him entirely in metal, I have no idea why his fists are the part he has decided to name himself after.

We join Emily Murphy mid-conversation apparently. She is reminiscing about her early days when she was to be Senator, but under Canadian law, women weren’t people. Uh oh! Anyway, later they fixed that.

The primary problem with this Heritage Moment is how little there is to it. Emily Murphy just remembers this time when there was a problem, then reminds us that it was fixed. There’s no sense of the struggle. We don’t get to see Murphy struggling with the problem like we do the early women in medicine. We don’t get to see her petitioning the “noble lords of the privy council” or whatever. All we get is a gentle reminiscing and we’re done. There’s no style to the soliloquy like John Matheson’s.

“I was not a person” has a bit of quotability, but it isn’t enough. I would be lying if I gave this Moment anything more than Two out of Six Pieces of PDR’s Reviewing System Cake. Having seen how much can be crammed into a minute, this little lesson in Canadiana simply does not make the most of its time.

Today we’re back in the days of the Second World War in Britain. The fog is so thick that it’s ridiculous to think of flying in it, but then someone does fly a delivery in and it turns out she’s a lady. She expresses a desire to one day get back to Canada and teach flying, then the narrator tells us that she did. Happy ending. This one seems pretty short, comparatively, but that’s probably because it essentially does the “Someone is coming in? In this fog?” setup twice. Not a great use of time, but I’ll never be upset with hearing shocked British officers saying “Hullo?”

Marion Orr comes across as really nice in this one. She’s doing her duty with a smile on her face and all she wants is get back to a simple life. The world would be a good place if it was stacked full of people like Marion Orr. Even ignoring for a moment the landmark of her being the first woman to do what she did, just seeing any person with this attitude achieve their dreams would be enough for me. If she happened to break any barriers while doing so, good on her.

I don’t feel anything in here is great to quote, but I still like it. I easily lump it into the “backbone” category I also put last month’s Heritage Moment into. Four out of Six Pieces of PDR’s Reviewing System Cake.

Unfortunately, though, somewhere in my youth I lost most of my memories of this Heritage Moment. Well, I didn’t “lose” them, really, they just managed to meld with another commercial I would have seen on television in my youth, also involving a meetup between people on an airfield:

This Oil of Olay commercial stuck in my head better, but I’m still more in favor of the Heritage Piece. For the record. Maybe if the guy Marion Orr had been talking to had been named “Bugsy Brown” I’d know more about Canada. Better luck next time, Canada! 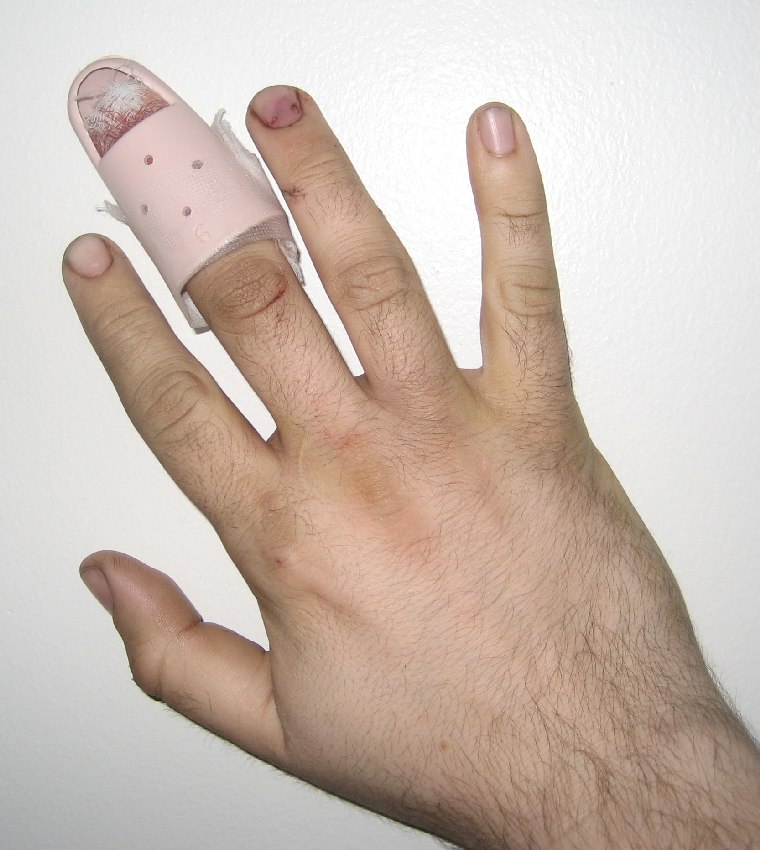 So, it is International Women’s Day, the day when we are all encouraged to find a special gal and buy her chocolates and pretty bows for her hair. That’ll shut ’em up, right?

Wait, I’ve just received word that I completely misunderstand what International Women’s Day is about and I am, in fact, a horrible person. Go figure. Well, as I’ve said before I’m a nation with no female population*, so it can’t be that surprising that I don’t know what the people of Internation do. What excuse does the Republican party use?

Anyway, why not throw out a little story with a positive female role model, PDR? Okay PDR:

Sally Titan saw the bank robbers get into their van and start speeding away. “Idiots,” she said to herself. “Now I’m going to be late for my tutoring session with Mrs. O’Malley’s kids because I have to deal with this.” With that, the muscular hero leapt across the street, bounded off the wall of the bank, and propelled herself down the street after the van. Civilians saw her streaking through the air toward the getaway vehicle, but they would never believe their own eyes. Sally kept her existence as secret as she could because she wasn’t in it for the fame. Overtaking the van, she grabbed the roof and used her momentum to slam it downward, stopping it. She had the criminals tied to a telephone pole before the police even made it to the scene. The crooks couldn’t describe what had happened, but they also couldn’t shake the blame for the heist, so they all went to prison. And Sally made it to the tutoring session on time after all.

There. Happy ending and everything. That makes up for what I said about bows, right?

*Some would say that my vigilant separation of PDR and women is my most important contribution to Womankind. You’re welcome everybody.