There is a group called the Weird Assassins. One of them likes to dress up like a cowboy. He always like cowboys as a kid, so when he developed a super power and became an assassin, he figured he might as well be cowboy-themed. It was that easy.

As his name might suggest, the Lightspeed Kid can move pretty fast, though only in short bursts. But he has learned to use these bursts for tricks like drawing his weapons at super speed or even dodging bullets. While that is enough for fighting regular people, and is generally good enough for the cowboy-themed assassin’s business, he has also worked up some tricks for fighting super-powered opponents, like using the momentum from a speed burst to make him jump long distances. All in all, he’s pretty badass and he’s for hire! Do you have more money than you need and someone you want dead? Drop him a line.

Anyway, the way I see it, moving momentarily at super speed would basically be like bullet time, so once I thought it would be a good power for a gun guy.

Otto is a vampire hunter. He does hunt vampires when necessary, but he is really hunting a vampire. In the singular. He is hunting Killshadow.

He also works for a vampire. His employer is the leader of the criminal cartel who Killshadow is working to destroy. He fitted Otto with enchanted metal limbs, made from holy irons that can not only cause harm to a vampire, but can also smash through a brick wall. But Otto is more than random hired muscle. His revenge is driven by the fact that Killshadow killed his brother. This time, it’s personal!

I had a sketch of this guy and didn’t know what he was. For some reason I thought of vampires, because he’d be posted near October (the Halloweeniest month), and I got it into my head that he’d be wearing those things to fight vampires. I decided to let it roll, so there he is.

Anyway, that’s the end of Supervillain Sunday year. I started at the end of November last year, but I think that was still longer than the Superhero Sunday “Year” was. Which, I think is appropriate. For superhero stories to work, the heroes should probably be outnumbered. That way it feels like they’re the underdogs. Even when they’re not.

What’s next for Super Sundays? I ain’t saying yet, but it won’t start for a few weeks anyway. We’ve got other things to deal with first…

I mentioned the class I dropped during the first week of this year’s schoolin’s, but I haven’t said anything about my other classes. Let’s do something about that. I’m taking a class that is about the history of Vampires.

I wouldn’t say I’m a big reader of vampire fiction. I’ve read Dracula, and I’ve read Salem’s Lot, and I’ve read the Tomb of Dracula comics, but that is probably about it. Still, it seems like an interesting enough topic. So here I am.

So far, I very much enjoy the class. The professor actually lectures! That may not seem like an exceptional thing, but far too many professors I have encountered try to have a dialogue with the class. They stop every five minutes to ask a question, or even just get them to finish a sentence. I get that they’re trying to draw things out of the students so that they have to actually think or whatever, but it always slows everything down. We get significantly more class when they don’t stop class every five minutes. I pay attention to the lectures, so the interminable nuisance. It’s nice to have something better for a change.

Still, though. There’s a lot of reading in this, and all of my classes. I made a real effort to keep up with all the readings this year, and with only three classes I thought I could do it, but I failed. I am already behind. To be truthful, it’s kinda disheartening. There’s plenty of ways, good and bad, that school makes me feel stupid, but none gets to me more than the repeated insistence that the more I read the quicker I should be able to read. I read a lot, but I am and always have been very slow at it. I shouldn’t take it so hard, after all, I skipped whole books I was supposed to read last year without hurting my grades, but it’s sad to me because I really did try and I really did fail.

Anyway, in the meantime, I’ve been failing to keep on top of Secret Government Robots again. This time, it is for a better reason: Kip and I are working on a pretty neat project (details will come in the future). I’m pretty excited about that, so pretty much any time I’ve had that was not already claimed by school, or work, or sleep, I’ve been spending on that. If I’ve now given up on trying to keep up on school readings, maybe I’ll have time to do that instead.

If I were thinking ahead, I might have saved these two for sometime near Halloween. Instead, I didn’t: 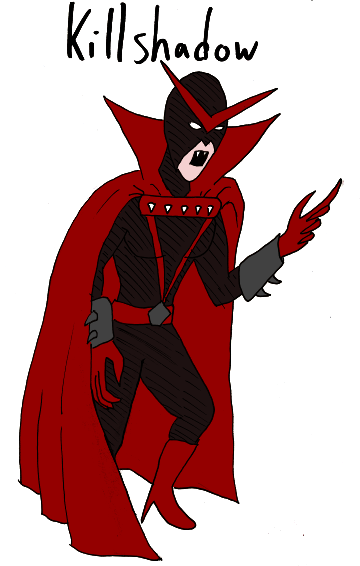 A young woman was murdered by a vampire and, as one might expect, rose as a vampire herself. But through sheer willpower and hatred she has the strength to oppose the vampire who killed her. That vampire is now the leader of an Eastern-European crime syndicate, so the woman, now called Killshadow, is slaughtering her way through her killer’s army in a bloody swath.

I don’t really have much else to say story-wise, because it is a pretty generic revenge deal. While the easiest inspiration for Killshadow is the 90s-style anti heroes (especially Spawn), but instead of making any kind of comment on those, I’m really trying to comment on the way vampires are treated these days. A lot of people have complained lately about “sparkly” vampires ruining everything, but I’m here to tell you that vampires have been a mess since long before that. Even things that I legitimately enjoy like Blade comics and Buffy the Vampire Slayer treat vampires as hordes of mooks to be mowed down by the hero. What I want is a return to a time when a single vampire was a threat.

Killshadow has ALL the vampire powers. She can turn to a wolf or a bat or to mist. She can flit through the darkness, control vermin and weather, and basically everything the folklore vampires could do. And she is in no way the sexy Vampirella-style vampire. Under that stupid mask she looks total Nosferatu-style. And while her sense of “justice” keeps her killing bad guys (this is still my superHERO-creating year) she does not brood about having to live off blood. She revels in the slaughter of her enemies and enjoys every moment.

Just so you know, I tried about twenty combinations of words like “blood,” “night,” “kill,” “dead,” “dark,” “shadow,” and a bunch of others before I got something that sucked just the right amount and also wasn’t already used too many times. 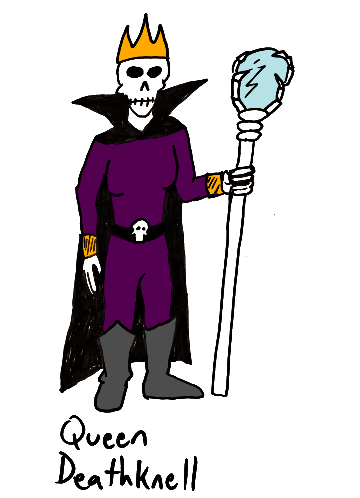 Built around a portal to the spirit world is the hidden city of Cemeteria. Though the world at large is unaware of the existence of Cemeteria, some supervillain learns about it and, seeking power over life and death, attacks the city. But Queen Deathknell and her army rise to oppose him, saving the day but revealing their presence. Queen Deathknell (Nell to her friends) is a benevolent ruler who maintains order in Cemeteria to keep the world from being overrun by undead, and keeping the afterlife from being corrupted.

It’s pretty common in comics to have rulers of fantastic realms play a big role (You’ve got the Atlantises of Aquaman and Namor, or my favorite, Black Panther‘s Wakanda, just to name a few), so Queen Deathknell is my one of those. I also like to take the imagery of death and treat it as not-evil, which is always nice.