A few years back I did a couple years of “Alien Sundays” where I would introduce ideas for alien species. Eventually those posts had to wind down, but just because I haven’t posted about them in a long time doesn’t mean that I’ve stopped thinking about my aliens. I do an awful lot of worldbuilding that I don’t tend to put on my site because I hope to use it in stories, but then I never get around to writing those stories.

Over the past few months Youtube has been suggesting an increasing number of speculative biology videos to me. I love that sort of thing, so the algorithm is correct to suggest them to me, but more importantly, it occurs to me that if there are so many videos on the topic, there may be some audience out there who may have a hunger for the kinds of ideas I’ve been working on. The problem is that those videos are done by smart people who have done actual scientifically valid calculations and thoughts of how their imagined lifeforms would evolve. I didn’t do that.

For example, my Strondovarians: I had the species name in some notes for a story idea. I also had a sketch of an alien with weird legs and four arms that I doodled once. When I felt like working on it, I decided that that alien sketch could be a Strondovarian. It was only then I started fleshing out their world. I did it utterly backwards compared to the speculative biology folks I enjoy so much. But y’know what? That’s fine. My universe is already one in which magic and monsters exist, so it was never scientifically accurate. I can just have my fun.

So I’ve decided I’m going to first go public with my notes relating to the planet Gurx, home of the aforementioned Strondovarians (Strondos for short). I figure I have enough in my notes to do a weekly post for a year, so it’ll be just like old times, only moreso! 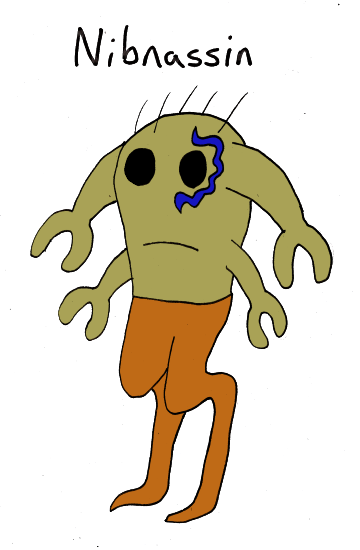 This is Nibnassin, a fairly typical Strondovarian. In the hopes of making it into medical history books, Nibnassin has volunteered to be scanned by various medical devices for the benefit of students. Thankfully this means I can teach you some of the basics of the Strondovarian body plan (bearing in mind that PDR’s drawing style is oversimplified and cartoony). 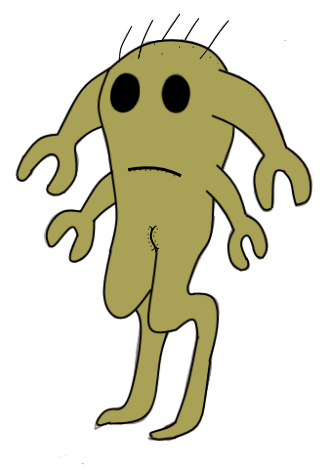 Here we have Nibnassin without their clothing and tattoo. Don’t feel embarrassed for our volunteer Strondo, though, because the Gurxian monoculture holds no taboos about nudity. This allows us to see the main bits of a Strondo. Two eyes and a mouth in a layout that humans would be familiar with, and an orifice between the legs involved in reproduction, again in a place that humans would recognize. Light fuzz on the top and back that can occasionally grow long. It is, of course, worth noticing that the Strondos have four arms in addition to their two legs. 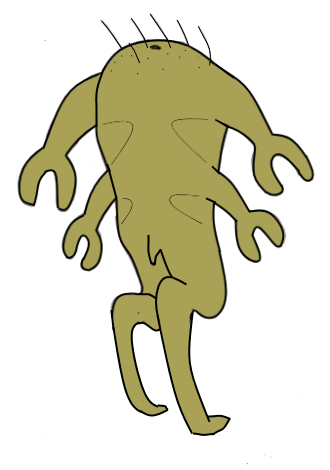 Here we have Nibnassin from behind. On his head there is his breathhole. The Strondo mouth is not connected to the respiratory system, all oxygen is taken in through this orifice. Down in what humans would call the butt region we have what looks like a little tail, but is actually a tube with a hole that is the end of the Strondo digestive system. They expel their waste through there.

Well, I’d hoped I could be getting into the inside parts of a Strondo in this post, but it’s already much too long, so we can do that next week.