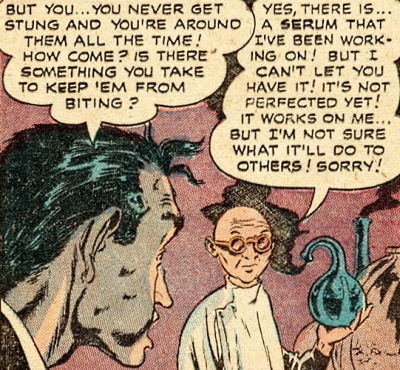 Walter Blane is a Beekeeper who appeared in Mystic #7, a horror comic from 1952. As I’ve noted before, science and beekeeping go together well, and Blane is indeed a scientist doing “special work on bees!” Although we don’t see Blane participating in the actual beekeeping side of the operation, he’s identified as a beekeeper in the text, he clearly loves the bees (they are his “sweet little friends”), and his hives seem to be thriving. The actual beekeeping done in the story is done by a greedy man named Casper who is paid well to take care of Blane’s bees while the scientist is stuck in his laboratory doing research and experimentation. When Casper, the protagonist, learns that Blane has a serum that prevents him from being stung, though Blane notes that it is designed to work with his own physiognomy and any other person who took it would be at risk, Casper steals the serum and drinks some. This, naturally, results in his head mutating into that of a giant bee.

That serum is interesting. All we know for sure is that it prevents him from being stung. It prevented Casper from being stung as well, though it turned him into a bee/human hybrid. Is it possible that Blane is also becoming a hybrid, but since the serum is specifically attuned to him, the effects are less grotesque and more intentional? And that’s just the one experiment we know about. Honestly, it feels like Blane is on the path toward supervillainy. Either intentionally trying to become a bee-man with plans of world conquest, or destined to accidentally become a monster of some kind. But that doesn’t happen in this story. Here, Walter Blane is just a nice beekeeper.

Although stories published by Atlas Comics are not generally considered canon in the Marvel Universe until they are referenced, there is nothing here that I can see that would prevent it. That means we can assume Blane or his research could exist in the same universe as Lucius Farnsworth.