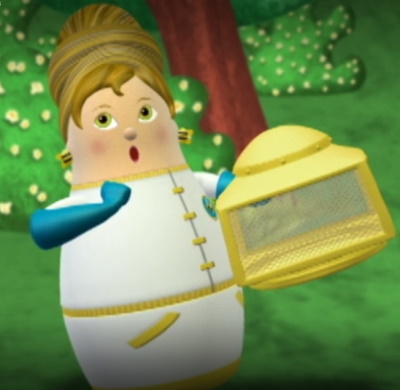 As near as I can tell, Higglytown Heroes was a show about all the different occupations people have in Higglytown. It must have been made by people with good taste, because there’s an episode about a Beekeeper. Kids need to learn. The episode, called “Two Bees or Not Two Bees” naturally, features some kids and some old people and a squirrel (presumably the main cast) who are saddened to learn that the bushes that should be full of higglyberries are not. They summon the Beekeeper to help them figure out what happened.

When she arrives, the Beekeeper Hero investigates a beehive near the bushes and finds it is abandoned (what happened to the bees is unknown), so she has her own bees pollinate the area. She does all this while giving educational lessons to the children. A month later the berries have grown, so the Beekeeper Hero treats the kids to delicious treats of berries and honey. But when the kids hail her as a hero, she makes sure to deflect that thanks to the bees, who are the real heroes. That’s a classy move.

Apart from impeccably-trained bees, does she have any supernatural powers that seem to be different than all the other toy-people of her world? Not that we see. But she has bee-shaped earrings, which is nice.