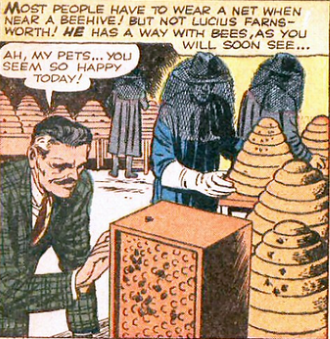 Lucius Farnsworth should have been one of the greats. Appearing in comics by Stan Lee and Jack Kirby in the early sixties, Lucius could have become one of Marvel’s most successful properties. Sure, he was appearing in Weird Sci-Fi stories, instead of more standard superhero fare, but so was Hank Pym and he made it to the Avengers.

But before I continue my rant about that, I should explain who Lucius Farnsworth is. Lucius was born with the all sorts of fancy mental powers and, naturally, he uses them to be a kickass beekeeper. He’s the “most successful honey producer in the state” and he has a luxurious estate to prove it. From his few appearances, we can see that he can hypnotize people and communicate with bees. He can also shrink himself and others at will. Who knows the limits of his mental powers. But, as far as ultra-powerful millionaires go, Lucius isn’t a bad guy. In one story he wants to help a loyal gardener reach his potential by starting his own business. In the other, one of his hired hands tries to burgle him, and Farnsworth just gives him a bee scare and lets him go when he promises not to rob anyone again. 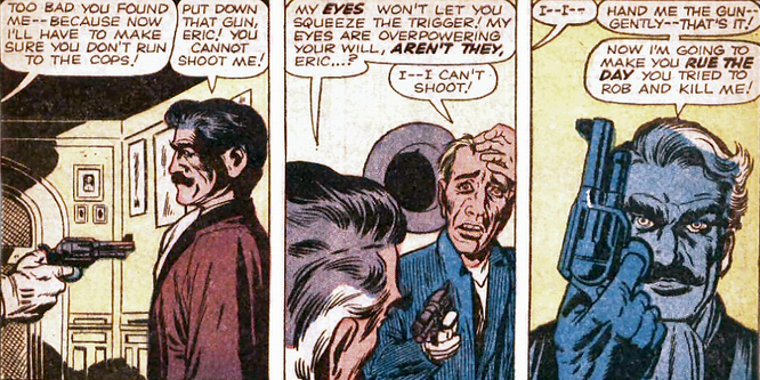 To sum up: He’s a rich and powerful beekeeper who is a decent guy. But maybe that’s why he wasn’t successful? All of Marvel’s heroes in the Silver Age were really defined by their weaknesses. The Fantastic Four bickered like a real family, and the Thing was trapped in a monstrous form. Spider-Man was a kid, with kid problems and his superhero life did nothing to improve it. The X-Men were discriminated against. Daredevil was a lawyer. That sort of thing. But Lucius here has everything going for him. But does he really? 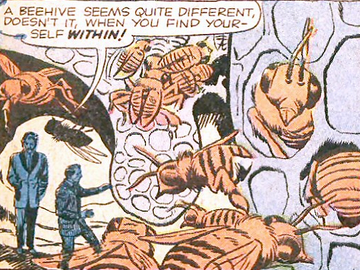 Lucius is old. His powers give him the most incredible mind, sure, but his body is well past its prime. If we use that as Lucius’s humanizing feature, we can have him trying to solve problems every month while his ungrateful kids try to convince him he needs his rest and that he should let them take over the running of things. His series would have been cancelled pretty quickly, sure, but the Hulk only lasted six issues on their first attempt. Lucius would have been relegated to guest appearances and more offbeat series never quite successful enough to break into the mainstream. He probably would have been shoehorned into ugly costumes in attempts to make him popular, or de-aged to make him cool. But hey, all that’s Dr. Strange’s deal too and he’s got a movie coming. I love Strange, but that could have been Lucius up there on the big screen and we’re all poorer that it isn’t.

But all of this is beside the point, isn’t it? I’m here to review how good Farnsworth is as a beekeeper. Well, he’s pretty good. Very successful, very powerful. Judging from his restrained treatment of a criminal, there’s no sign of Beekeeper Rage. Pretty good indeed.

Three Honeycomb out of Five. With full confidence that he’d be at Four if Marvel just had the guts to give him the exposure he deserves.

I’m just saying, if that SHIELD show I’ve never seen wants to do an episode around this guy, they should gimme a call.