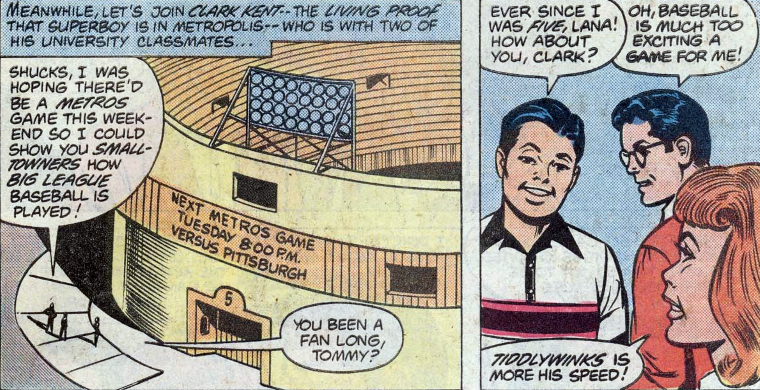 The Lee Family first appeared on the Superman radio show in the 40s. Specifically, they are the focus of the Clan of the Fiery Cross story. Here we met Tommy Lee, a friend of Jimmy Olsen who was recently promoted to pitcher on their baseball team because he was better than the guy they had before him. Tommy’s father, Dr. Wan Lee, was similarly recently made Metropolis’s head bacteriologist. In both cases, there are people who don’t like that Chinese immigrants were chosen over “real American” white men for those roles. And so, the racist secret society called the Clan of the Fiery Cross target the family, tries to scare them away or even kill them. It’s a decent Superman story that I have avowed for years ought to be retold. Admittedly, the Lees didn’t do much in the story, reacting more to things happening to them than acting of their own accord, but it doesn’t change the fact that they are characters who had an important role in a classic Superman story. That alone might not have caught my interest, if that had been all we had to go on.

The comics are still seen as the “real” version of Superman by most people, which is strange given that so much that is considered important to the mythos came from the radio show or the cartoons or the movies. But still, for me to claim the Lees were important to the franchise, they’d need to have shown up in the comics. Luckily, it happened. Granted, it wasn’t for nearly four decades. In the pre-Crisis 80s, DC did some stories called “the In-Between Years” which filled in a gap in Clark’s history, between his time growing up in Smallville and his time working at the Daily Planet. Mostly, these stories were about Clark’s time in university. It turns out that Clark’s roommate at Metropolis University was one Tommy Lee. 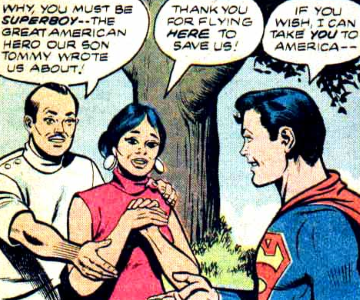 In this iteration Tommy is Clark’s friend rather than Jimmy’s, but otherwise he is very similar to the Tommy of the 40s. He is Chinese, the son of immigrants, lives in Metropolis, and likes baseball. His father is named John Lee here, but that is an easy Anglicization of “Wan Lee” and John Lee is still a doctor, albeit helping out abroad in war-torn Vietnam (his wife Susie along with him) rather than living in Metropolis. There is enough similarity here that if the writers didn’t do it intentionally, I am forced to think some magical cosmic force was trying to make the characters reappear. Tommy gets a bit more to do as Clark’s roommate, and Dr. Lee’s bravery in standing up to the racists Clan is amplified when he goes to war zones to help people.

Still, the 80s appearances of Tom total nine issues (his parents only in two of those) and the radio story lasted eighteen episodes. In a franchise that has run for fifty years at that point, that doesn’t amount to much, does it? Do I have anything else that proves this family is important to Superman? Of course I do.

For one, there’s an episode of Smallville with a character named Tommy Lee. Granted, this Tommy is a bad guy, white, and has super powers. But I can still cite him as proof that the name keeps cropping up in the franchise. And really, characters have been changed more than that when adapted across media. 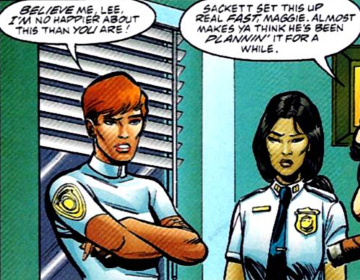 But there’s one more piece that really solidified it for me. In the Clan storyline, there is mention of another member of the Lee family, a sister to Tommy, who is never named. I latched onto that and it paid off. In the 90s comics, there was a rookie cop who joined Maggie Sawyer’s Special Crimes Unit (that’s the special police task force that Metropolis had to form to deal with supervillains and such). This Lee, an Asian woman, appeared in only three issues that I know of and was never given a personality or history beyond being nervous about living up to her new job. She never even got a first name. She’d be utterly forgotten by anyone who isn’t me. But it turns out I am me, so I’m gonna make the claim that this young police officer is the post-Crisis incarnation of Dr. and Mrs. Lee’s daughter, sister of Tommy. Incidentally, I am in favour of calling her Betty, which is the most tenuous connection I will make here today: in Superman #108, way back in the 50s, there was a story in which Clark had to defend his secret identity from the smartest “Girl Cops” in Metropolis (being a woman police officer was enough of a novelty to merit a story in those days, I guess). One of those Girl Cops was named Betty, and while she was not coloured with the yellow palate that would usually have denoted an Asian woman in comics in those days (I mean, good, right?) she did have black hair and was not given a last name. Tying Betty and Lee into Betty Lee is just one more stitch to strengthen the tapestry I weave here today. (EDIT FROM LATE 2019: The Superman Smashes the Klan book has given Tommy’s sister the name Roberta, which maybe isn’t what I wanted, but the very existence of that book is far better for the characters than my tying it to some obscure silver age book would have been.)

“Okay,” my non-existant reader asks, “but what does it matter? Even if they existed, what good would it be to bring these characters back?” Well, I’ve made it clear that I think rich supporting casts are something that all superhero comics need, and the Lees have plenty to offer the Super-franchise:

First and foremost: Diversity. There’s an annoyingly large (or at least vocal) subset of fandom that complain about “shoehorning” diversity into comics these days. I don’t agree with their complaints in the least, I say shoehorn away, but right here we have four whole characters who they can’t claim were made up out of nowhere just to be “PC” or whatever, because these characters have existed longer than those complainers have been alive. And it shouldn’t be forgotten that a family made up of immigrants and children of immigrants fits right into the franchise’s themes about that stuff, which begin with Clark himself.

And the characters have individual roles that can make them useful in stories as well:

Betty Lee is the easiest. As a police officer, she can show up any time the police do. This actually gives her the opportunity to show up in action scenes, which some writers feel is the only important thing for characters in superhero comics to do. But it gives her chances to interact with villains and heroes alike.

John and Susie Lee would likely be prominent figures among Metropolis’s high society. I could see them as the types who show up at ritzy galas thrown by Lex Luthor, or get targetted by criminals looking to rob someone rich. John’s medical career means Superman could consult him the next time some alien virus is causing problems, and Susie, as a blank slate, could be used in any way the writer sees fit.

Tom offers a more direct connection to the main cast. I think he’d be a good choice to give a friend to Clark, Lois, and Jimmy who doesn’t work at the Daily Planet. The Superman cast can get a little bit claustrophobic in that newspaper, so it would humanize the cast a bit if they had one guy who offered a different perspective. (Also, I bet Tom likes the Planet’s macho idiot sports writer Steve Lombard and fun could be had with that.) And, I wouldn’t do it, but if some hack writer wanted to take inspiration from Smallville, they could have him become a supervillain too.

Okay, I could go on, but I think I’ve made my point. These characters deserve to be brought back on purpose for once. Meanwhile, just rest assured that as I continue to consume Superman-related media, I’ll be on the lookout for any more appearances of the Lees that nobody else has noticed.