“Never underestimate the powers of nature”

Today’s Beekeeper comes from an old-school episode of Doctor Who called Delta and the Bannermen. Goronwy Jones (using the surname that only appeared in the script because I like to be thorough) is a Welsh Beekeeper who gets caught up in one of the Doctor’s wacky adventures and doesn’t bat an eye. That’s the main thing about Goronwy: he is not surprised by much. In this story a time-travelling alien asks Goronwy to help protect some other aliens from an army of still more aliens. During none of this does Goronwy question anything, he just happily lends his home and beekeeping supplies to the cause. During the tense confrontation, Goronwy takes the time to explain beekeeping stuff to anyone who will listen and can be seen casually reading a book. The only explanation is that Goronwy has seen weirder stuff before. 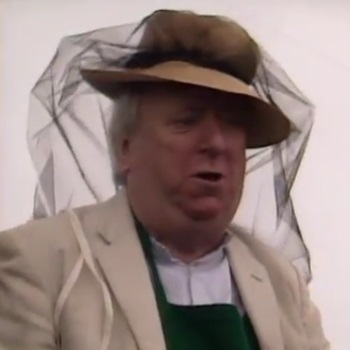 Am I suggesting that Goronwy may even know the Doctor before this in some time-travel sense? Am I suggesting that he may even have been, in his youth, a companion to some version of the Doctor that we have not yet seen? Am I suggesting that he may be the most important character to ever appear in Doctor Who and even the Doctor doesn’t know it yet? Of course I am suggesting all of that. That’s what these Beekeeper Reviews are about, aren’t they? But actually, the episodes do make the case that Goronwy has a history, if not with the Doctor, with weirdness at least. When some Americans looking for a fallen satellite ask if he’s seen anything strange fall from the sky, Goronwy says “I’ve seen many things fall out of the sky, but nothing that could be described as weird” and he talks of strange lights (presumably UFOs) that he’s seen around the area. And does his own history with the bees seem supernatural? Well, it’s certainly mysterious that he can’t even say how long he’s been doing the job (because of time travel or old-person memory? Who can say?) and he suggests that he can talk to his bees, saying “They know everything that happens.” Even without my bias, we’ve got hints that this guy is far from an “ordinary” beekeeper.