The “Supernatural Sunday” theme has been going on for more than a year now, so I think it is time to switch things up. But before we get into the next year’s theme, I will do another superfluous post of characters that aren’t even new: 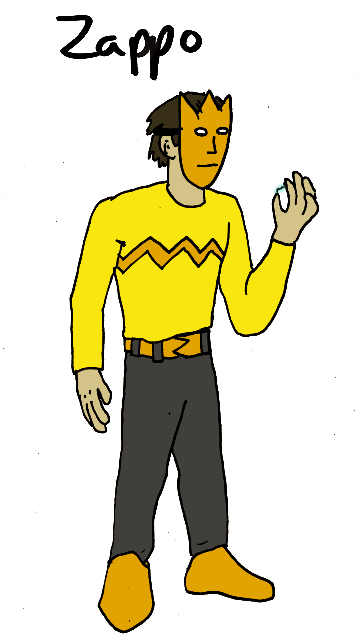 Mike Titus was a regular, ordinary young man who got caught in a science accident that gave him electricity-based superhuman powers. In Zappo’s world full of superheroes, this was not that uncommon an occurrence. It’s been known to happen. Following the examples of all the other people it happened to, he crafted a superhero persona for himself and got to fighting crime.

When I was in elementary school, I created Zappo. Drawing him at the time, his face looked like the mask he wears as I draw him now. Just inexplicable Bart Simpson-spikes on his head. I don’t know why I did it that way, but I think this mask at least makes sense of it. It would be very important to Zappo stories that he is not very powerful. A lot of superhero comics try to do stories with underdogs where the lesson seems to be “you might actually be the most powerful hero of all” and I hate that. It may go against a core tenet of superhero comics, but I don’t equate physical power with worth. Zappo would have some minor electrical powers and that’s it.

Also, we must never forget that a frog was also caught in the science accident and it also gained powers and it is now Zappo’s pet and he calls it Zap-Frog. 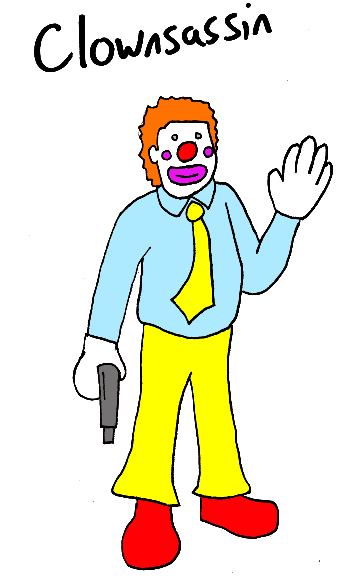 The Clownsassin is the still-living spirit of a human who abandoned their birth-body to take on the forms of other people. Atypically for such people, when the Clownsassin takes on a new body, it immediately begins to get dressed like a clown and then go on a killing spree. Gotta have a hobby, after all.

The Clownsassin has made some cameo appearances in Secret Government Robots, including the currently running final storyline. I wouldn’t usually do a Super Sunday post for a currently-appearing character, but I wanted to talk about the origin of the Clownsassin. If it isn’t obvious from how often I mention finding information about characters in “my notes” dating back all the way to when I was in elementary school, I think up a lot of ideas but don’t follow through on stories as often as I ought. One of those things was to be “Wizard Ghosts”. They were meant to be a big part of a bunch of PDR stories, but they just sat in my head as I failed to tell those stories. And then, around 2008, the webcomic Dr. McNinja by Chris Hastings introduced Ghost Wizards (that image is from a later story). These Ghost Wizards were way cooler than my Wizard Ghosts, who were just magic users who had no permanent physical form of their own. I didn’t completely abandon the idea, Wizard Ghosts are mentioned a few times in Secret Government Robots, but I felt like I had to lessen their role. After literally years of internal debate (as I said, these things take a long time for me), I decided I can still use the ideas and just not call them Wizard Ghosts anymore. That is the term that SecGov uses for them, but they don’t call themselves that. 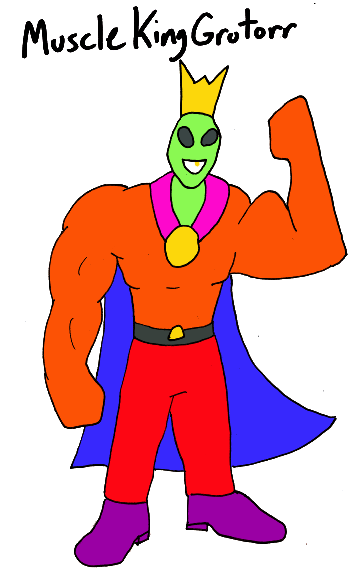 On planet Deltoi, everyone is tough. You may think you’ve met some tough people here on Earth, but you are wrong. The Deltoids can slap rocks into dust, jump into orbit, and shrug off explosions. They are a warrior people who find all reasons to fight among each other and other reasons to attack other worlds. And strongest of them all is Grotorr. This is most fortunate, because Grotorr is a peaceful king, more likely to save other worlds from disaster than to conquer. Also, he has a gold tooth. There are Deltoids who crave violent invasions of weaker species, but Grotorr won’t allow it. After all, if those species are so weak, they wouldn’t be enjoyable to fight. Since no other species (that remains) is stupid enough to try to invade Deltoi, the only fights Grotorr gets that are worthy are would-be usurpers.

Grotorr appeared in a single Hover Head strip. I couldn’t pass up the chance to make that character into something bigger now could I? I picture Deltoid society being like the Saiyans on Dragonball. And not even what Saiyans are actually like, but what I assume they are like based on my limited knowledge. They fly around space with no ships and fight each other in world-shattering combat that takes hours.