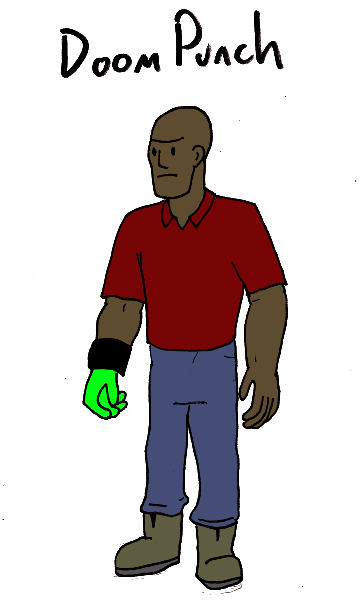 There is a group called the Weird Assassins. One of them, however reluctantly, is Doom Punch, also known as Rick Ramsay.

Rick was never really a good man, but he wasn’t a wholly bad one either. He’d had his troubles with the police, but the crime that he was sent to prison for, a double homicide, was one that he had not been guilty of. He’d just been the wrong color in the wrong place at the wrong time. He was convicted and sentenced to life behind bars. Whether it was a lucky break or not is impossible to say, but the warden of the prison was the type to conduct strange occult experiments. Seeking a volunteer, the warden offered Rick preferential treatment if he agreed to be his test subject.

Long story short: Rick wound up with a magic hand replacing his own that could kill at a touch. Instead of being nicer to Rick, the warden attempted to have him killed, so Rick escaped. Living in a world with superheroes, Rick made the understandable jump to trying to make a living as a bounty hunter. But it is not easy for a wanted man with a death-touch to keep on the straight and narrow path. He needed money, and eventually realized that killing could be the easiest way to earn a living. In the end, he’d become not only a killer, but a killer much worse than the one he’d originally been accused of being. 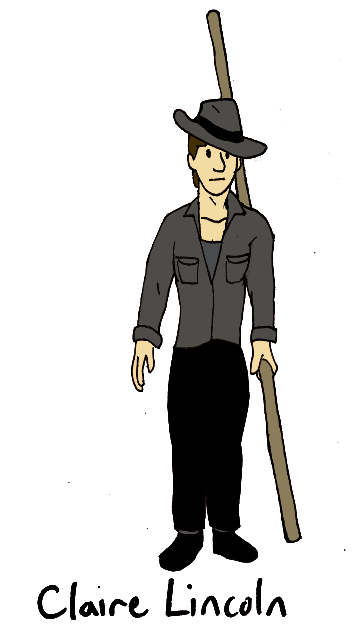 Claire is a member of the same demon-plagued family we met with her cousin Natalie Lincoln. To reiterate: a demon cursed this family line so they would be attacked by all sorts of monsters and mystics, but rather than die off, the clan has grown especially skilled at fighting supernatural forces.

In her lifetime of fending off those forces, Claire has picked up some intense fighting skills, along with a particularly study bo staff made of strange mystical wood. That sort of thing is common in her family, which is why so many of them wind up either as monster hunters or paranormal investigators or other similar occupations. But Claire has always wanted to be a teacher. That seemed like an impossible dream for someone who is at constant risk of being attacked by weird enemies, the kids would be in danger at all times. But what if the kids were already in danger? Recently Claire has been given the opportunity to teach and train a class of children who are, like her, likely targets for mystical foes. The children of wizards and demons and mad scientists need to get educated somewhere, and why shouldn’t Claire be the one who teaches them? Claire is very interested in taking the job, but she can’t help but wonder who the secret individual bankrolling this strange school could be.

Stories about a class made of weird kids with powers and stuff are practically overdone. So I wanted to do it too, obviously!