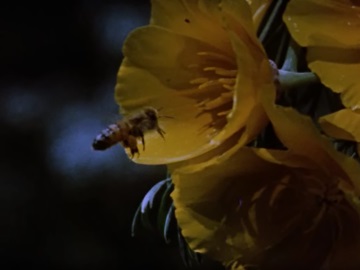 Today’s beekeeper appeared in an episode of Mission Impossible titled “Zubrovnik’s Ghost”. First, let’s have a quick summary of the episode: Some enemy agents are trying to convince someone to defect to their side by telling her that her husband’s ghost wants her to. That’s a lie, though. Her husband, the titular Dr. Zubrovnik, wasn’t even dead for real. For the purposes of this ruse, the bad guys killed a beekeeper and burned his body to pass it off as Zubrovnik. That was a mistake. The beekeeper’s ghost takes its violent revenge on his killers, and the agents that Mission Impossible sent (I’m not going to bother learning which organization stars in the show) get to stand around wondering why this show isn’t about beekeeper ghosts every week.

We never get to see this beekeeper alive, or even learn his name. He’s an unfortunate victim of a murder before the episode even begins, which suggests he may not be the best fighter, but from his position in the afterlife, he displays some real power. 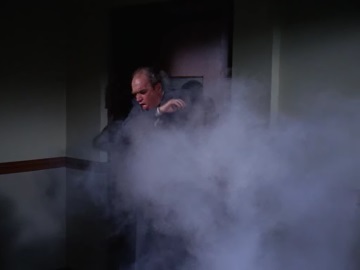 The first suggestion that things are not as they seem is that the bees around Zubrovnik’s mansion are active at night, and even during thunderstorms. Of course, they also wind up swarming the murderers, so it is pretty clear they’re doing the dead beekeeper’s bidding. The ghostly apiarist also displays control over smoke, another standard supernatural beekeeper weapon. Furthermore, his ability to shut and lock doors from beyond the grave should be mentioned. Sure, that’s more Ghost Power than Beekeeper Power, but it is his Beekeeper Rage that brings him back from the grave in the first place.

We do have to address that Beekeeper Rage, though. Now, I’m not going to say getting murdered is something one shouldn’t get a little ticked off about, but as is so often the case, Beekeeper Rage goes above and beyond rational anger. Mission Impossible’s psychic agent tries to contact Zubrovnik’s ghost, but instead find’s the beekeeper, whom she describes as having “unquenchable power”. “It hates,” she says. “It hates!” The beekeeper is using his ghostness to strike out at some bad guys, so I can’t say he isn’t using it in a productive way, but it sure seems to have completely overwhelmed his humanity. Hopefully once the murderers are dead he can find some peace.

It is my understanding, from Internet research, that the Mission Impossible franchise has maintained a continuity that goes all the way to the movies that still come out to this day, rather than having been rebooted like so many franchises. I also understand that the truly supernatural events in this episode are not in keeping with the general tone of Mission Impossible. Since this is supernatural beekeeper exists in a world where that sort of thing is not common, it is actually more impressive that he has these powers.