Look, I have made no secret of the fact that I think Beekeepers are underrated. There is really no good reason why the apiarist should not be venerated among the paragons of badassness such as ninjas and pirates and such. To prove that this obsession is not wholly based on my own whims, over the next year or so, I’m going to take you all on a tour of the Beekeepers of fiction and at the end, you’ll all agree with me. 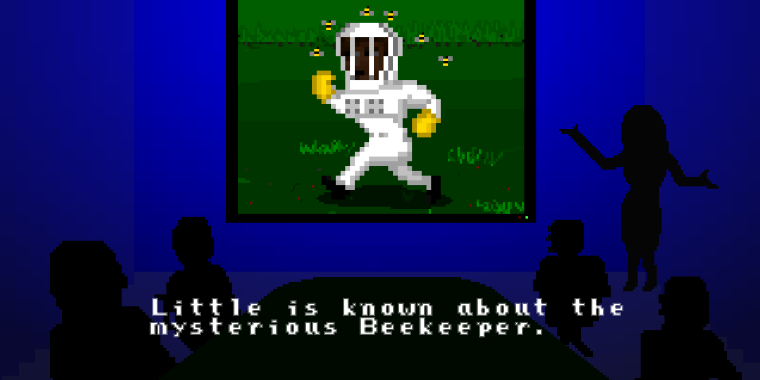 Fist Puncher. I mentioned Fist Puncher way back when I first heard about it. It is the tale of a group of vigilantes who fight their way across the city of San Cruces to rescue some kidnapped beauty queens. One of those vigilantes is a beekeeper, known only as the Beekeeper. 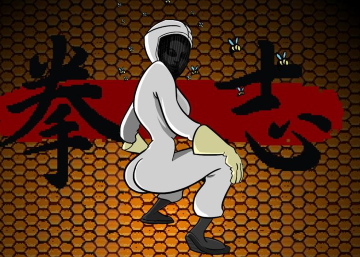 Like all of the Fist Puncher vigilantes, the Beekeeper is a stone-cold badass. In addition to all the standard punching and and jumping and kicking (and a special whirlwind kick thing) of a typical brawler hero, the Beekeeper’s got a swarm of bees to help. With her “Bee.S.P.” (like ESP, but bee-related) she can summon her bees to fly around the level just stinging any enemies that are around. She can also just throw a ball of bees right in an enemy’s face. I played through the game on a Beekeeper-only run and she was able to surmount every obstacle she came across. She rode motorcycles (and ostriches), she fought criminals and robots and Nazis and everything else, she even gained the ability to come back from the dead Twice Per Level. That’s a tough beekeeper.

But here’s the thing, I’m about to give away the end of the game: it turns out that the vigilantes might be acting a little bit rashly. Without going into specifics, it turns out that this cross-town rampage gives the real enemies exactly what they want. This highlights something we’re going to see a lot as I do these reviews: Beekeeper Rage. Beekeepers have anger issues. This is a consistent fact. This particular Beekeeper at least has the excuse that she is going along with her friends in her rampage, but peer-pressure doesn’t make it right. There’s apparently another mode that continues the story, but even if she and her friends get their act together there, the damage has been done.

So, altogether, what do we have? We’ve got a Beekeeper with bees willing to fight and die for her, apparent supernatural powers, and genuine fighting skills. If she could reign in her anger, she’d score higher. As it is, this mysterious Beekeeper’s rating is: