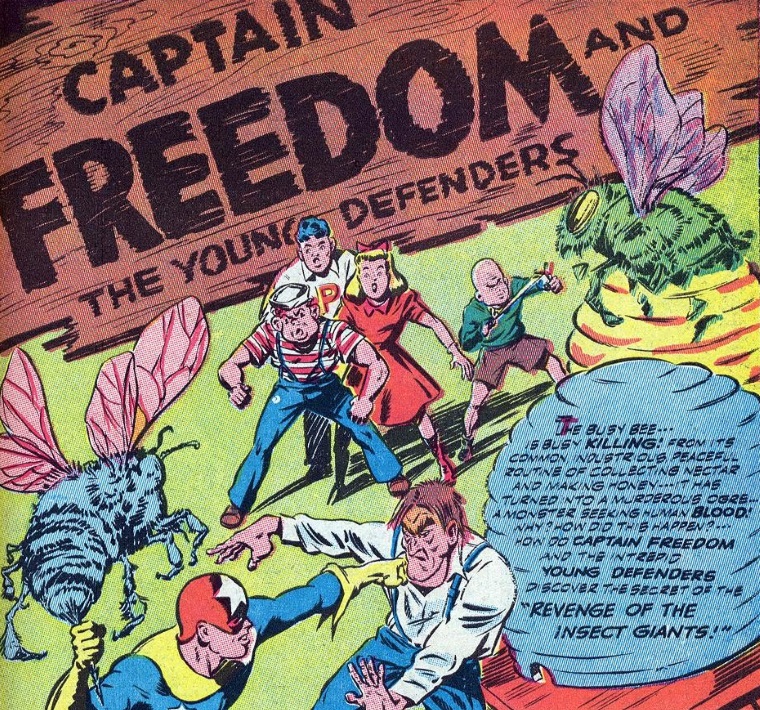 Beekeepers aren’t always on the side of good. During the Golden Age of Comics there were plenty of superheroes, which, of course, means there were even more super villains. Captain Freedom may never have made it to the big leagues of superheroes, but he had a run in Speed Comics that lasted for a few years. Probably fought a lot of supervillains in that time. In one issue, issue #35, the villain was a beekeeper. 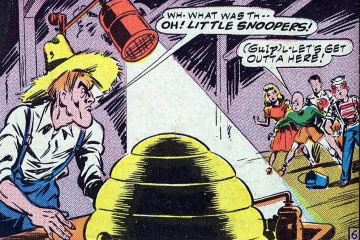 So it seems that Captain Freedom’s deal is that he is your standard low-powered patriotic hero who hangs out with a tough kid gang (Those were popular in those days. The Newsboy Legion and the Young Allies are some of the more prominent examples.) Captain Freedom’s friends, the Young Defenders, stumble upon an argument between beekeeper Jabez Mather and his neighbor Hiram Bymore. It seems that these two have been at odds for years, and their families have been feuding for generations. This isn’t gonna end well for Hiram, because Jabez is a particularly science-minded beekeeper.

Indeed, in spite of his apparently country bumpkin nature, Jabez has successfully invented an “insect growin’ process” that makes his bees gigantic. Like the size of flying dogs or something. Also, Jabez is apparently able to control his bees by ordering them around by humming. But the first of the big bees refuses to listen to Jabez and goes out and stings Hiram’s bull to death. Hiram responds by shooting up Jabez’s hives and the beekeeper responds by sending all his huge bees out to feast on human blood! Hiram is killed pretty quickly. Pears are stolen. 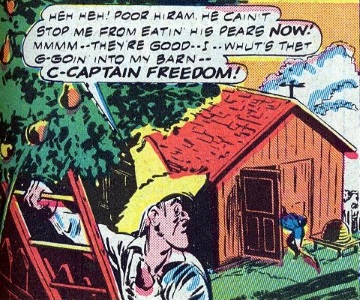 The Young Defenders are the first to investigate, but Jabez incapacitates the whole lot of them by throwing “a smoking smudge pot” at them, which renders them unconscious so that Jabez can tie them up and coat them with nectar so they’ll be eaten alive by bees. As is tradition for superheroes, Captain Freedom shows up to solve the problem with punches. The hero takes out one of the big bees, but all but declares that he’s doomed. He is surrounded by angry giant bees when Jabez foolishly decides to help the bees out by throwing a jar of nitric acid he had lying around. 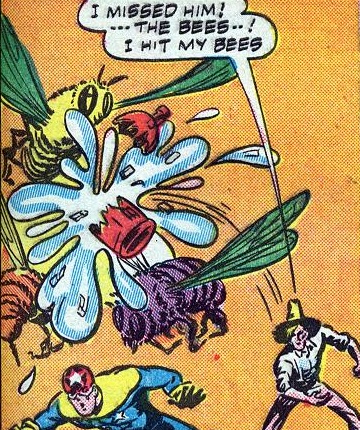 Jabez manages to kill all of his own bees in that one acid toss. That would be an incredibly badass move if he’d done it to almost anyone except his already-winning bees. Jabez doesn’t even think to pass it off as a change of heart, instead he just makes a break for it. It doesn’t take long for Captain Freedom to catch up to him and punch him in the face. Jabez falls into one of his own hives and is fatally stung. As he lay in Captain Freedom’s arms, he laments his folly, then dies.

This is, I assume, Jabez’s only appearance. With so little to go on, I just decided to give you a full description of his story. Now we all know the tragic tale of Jabez Mather. It’s worth noting that Captain Freedom is apparently one of those golden age comic characters that have fallen into the public domain. So if any enterprising genius out there wanted to give us a sequel where he meet the rest of Jabez’s beekeeping family, it would be totally legal. 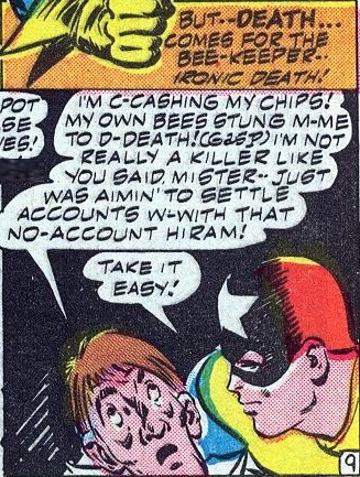 As far as supernatural beekeeping powers, Jabez provides a good showing: Giant bee creation and supernatural bee control humming are both impressive Beekeeping powers, and his use of smoke to take out the kids is pretty good too (I assume the Young Defenders are probably captured a lot, but still he got them pretty easily). It’s important to note that Jabez does not create his bees with evil intent, he just figures big bees will make a lot of honey. There is a possibility that the bee that killed Hiram’s bull was acting on Jabez’s hatred of Hiram, but that’s never said. As he said in his dying words, Jabez didn’t want to be a killer. It’s just that when Hiram shot up his hive, Jabez gave in to Beekeeper Rage. That was his downfall. So how does he rate?

Two Honeycombs out of Five. Beekeeper Rage squanders the potential of another promising apiarist.