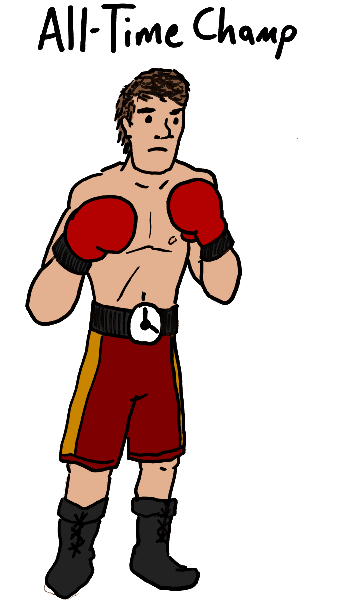 In the late thirty-third century there is a man born with incredible power. He’s stronger, faster, more agile than anyone else, and he proves it by challenging the toughest fighters of his age. He defeats them all. But the Champ has another power, he can travel back in time. Using this ability, he decides, he can prove himself the greatest fighter ever: the All-Time Champ. Projecting himself into history, the Champ challenges the best and brightest warriors. Travelling chronologically, the Champ trounces the Stone-Ager, a caveman made from living rock. The Champ wears down ancient Africa’s Lightning Lioness after two solid days of combat. The Champ knocks out the Sumerian Boar King with a single punch. The mysterious Kung Fu Supergenius, the Viking Wizard King, the Knight of the Lamp, and so many more. All the greatest heroes are beaten by the Champ. But his world comes crashing down when he reaches the twenty-first century. The Noblewoman is the first opponent to defeat the Champ. Now, nursing his bruises and his bleeding lip, the Champ swears: He will have his revenge. He will defeat her, even if he has to kill her to do it.

The All-Time Champ is one that’s been in my head for a long while. I mentioned in my post about Noblewoman that I had ideas for stories, the All-Time Champ is an important element to a few of those stories. One aspect of his time-travel powers is that he can not go back in time further than a time period he has already been in (with the obvious exception of his present), so after his first encounter with Noblewoman he can’t just go back and beat her up as a kid or anything. Rematches, but no prematches. 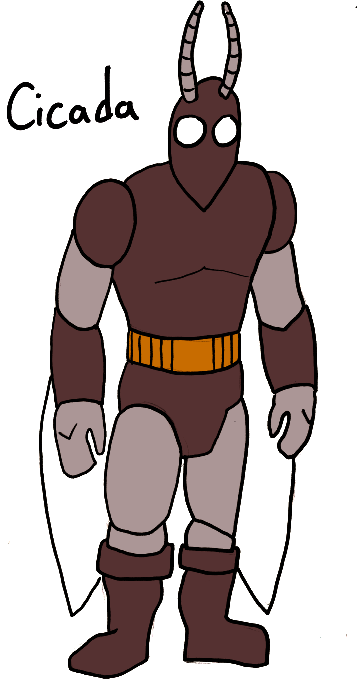 Mary Branston was a disgruntled employee at a weapons design company. Overlooked for promotions after a decade of service, she decided she could do better on her own. Designing a suit of armor that enhanced her strength, allowed her to fly, and fired powerful sonic bursts, Mary became the Cicada. With that, it was easy to start robbing armored trucks, banks, and jewelry stores. As tends to happen, this brought Cicada to the attention of heroes like Stegosauress, Vanquisher, and Justifier.

There’s no denying that this character is inspired by the old Spider-Man villain, the Beetle. But more specifically, it is my reaction to the new female Beetle who has taken up the role since original Beetle has become a good guy with a different identity. If you follow that link, you’ll see a woman wearing sleek feminine armor that makes sure to show off her curves. Ain’t no reason for it, but it is actually quite typical for armored women in comics to have armor that accentuates their sexiness in ways that male characters’ wouldn’t. Adding breasts to a suit of power armor is not necessary, but it is ubiquitous. I should note that out of the, I think, five replacement Beetles since the original quit, three have been women and this is the only one who wasn’t just wearing old Beetle armor, so this is one armored super-identity where the sexism already has been mildly avoided, but its still the example that led to this character’s creation. Still, Cicada, unlike the replacement Beetles, is given the distinction of creating her own armor rather than taking someone else’s.