A married couple saved a wounded alien from criminals, but in the process their unborn child was wounded. The alien recognized the nobility of their actions and used its powers to mend the child in the womb. When she was born, she had amazing powers. When she grew up she became the Noblewoman, using her powers to try to make the world a better place.

Noblewoman has your basic set of powers. She can fly, she’s super strong, all that stuff. The excuse for the powers is a connection to higher spatial dimensions. Her version of X-Ray vision is actually an eye that extends into this fourth dimension and can see “around” objects in the third dimension. That sort of thing.

It seems like every comic writer has a Superman homage character. You’ve got Hyperion, Apollo, Supreme, Omni-Man, the Sentry, Homelander, Samaritan, Crusader, and that’s just off the top of my head. Superman is obviously pretty influential on the genre, so with a Superman-homage you can explore some of the core elements of the genre by toying with him. Noblewoman is my take. She’s the top hero of her world, a staunch defender of truth and justice and such, and she’s the leader of a team of heroes. Possibly more than any other character I’ll introduce this year, I’ve got a lot of story ideas for Noblewoman and would love the opportunity to do something with them some day. 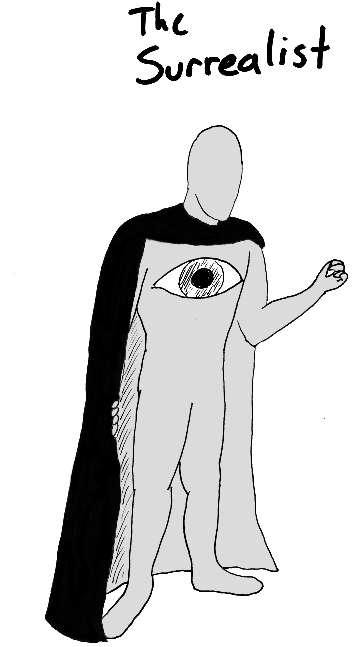 The Surrealist is a mind-bending crimefighter. He’s an expert with sleight of hand and magic tricks. Inside his cape are dozens of secret pockets with flashbangs, smoke bombs, and remotes for a hundred different gadgets. The Surrealist is master of preparation, with stashes of tricks stowed all over the city ready to use. And if he knows ahead of time where an encounter with an enemy might occur he’ll set up large-scale illusions to disorient the criminals.

But all of that is a distraction to hide a bigger secret: The Surrealist has super powers. He has a hallucinogenic touch. By laying hands on a criminal, the Surrealist can administer a trip, the mood of which is up to him: tranquil and relaxing or downright traumatizing. It’s probably best to stay on his good side.

The Surrealist is my Batman homage to go along with Noblewoman’s Superman homage. He’s a guy who has a hatred for crime, a lot of money, and questionable ideas of how to use money to fight crime. For the record, the cape (and a hood you can’t really see), is black, so he can pull it over himself and hide in shadows. The costume and mask are shining silver that dazzle and amaze when he reveals himself. He’s a showman. He and Noblewoman would be friends and colleagues, but would work in pretty different circles.