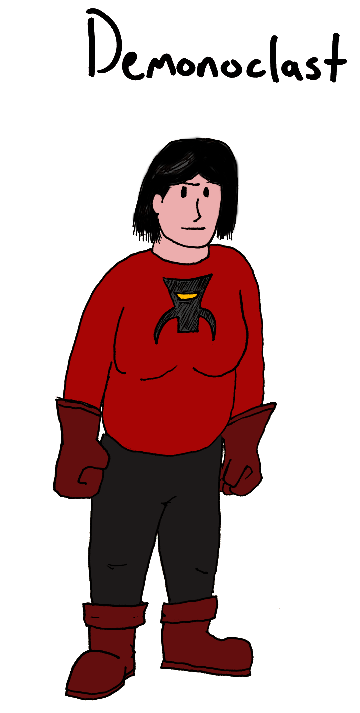 Joann Hanlon is employed by the government, but they don’t admit it. Joann Hanlon destroys demons. Her work is necessary, but, the government says, if word got out about the existence of otherworldly evil creatures there would be panic in the streets. Luckily for everyone, Joann Hanlon is extremely good at her job. When any kind of demonic invasion is discovered, the Demonoclast is sent in things are cleared up quickly.

This was one of those cases where I just drew and saw what came out. I got the gloves and the boots and I thought “She looks like she does hard work. What’s hard work in superheroing?” And eventually I decided that cleaning up demon infestations would have to be near the top of that field. I drew that little sigil on her chest, somewhat inspired by the little ghost monster face on Dr. Strange’s costume (though a lot of the time that is just drawn as a generic shape these days).

Also, the name “Demonoclast” which means “Destroyer of Demons” appears nowhere according to Google, so I’m pretty happy about that.

Vic Decker was a baseball player until he was paralyzed in a car accident that he had caused. While he spiraled into depression for a time, he eventually found a place in the world as a public crusader, trying to improve his hometown with various social causes. But this brought him into contact with a local crimeboss, who didn’t want some gimp celebrity interfering with his business. The crimeboss sent a hitman to take out Decker, but things did not go as planned. During the attack an experimental energy device that Decker had been investing in exploded and bathed him in bizarre energies that not only caused his body to heal its wounds, but raised him to new superhuman levels. Super strong, nearly invulnerable, fast and agile, Vic Decker became the Vanquisher to face off against those who use violence to stand in the way of social progress.

You’ll note that none of that description addresses the way Vanquisher dresses. That is on purpose. Vanquisher dresses in clothes that he finds comfortable and that’s that. As I’ve said in the past, I have no personal belief that society’s conception of what constitutes manly or feminine clothing is an absolute truth, so I’m willing to let Vanquisher dress as he pleases and not depict him as being weak because of it. I can assure you that if I were better at drawing, that outfit would be much lacier.