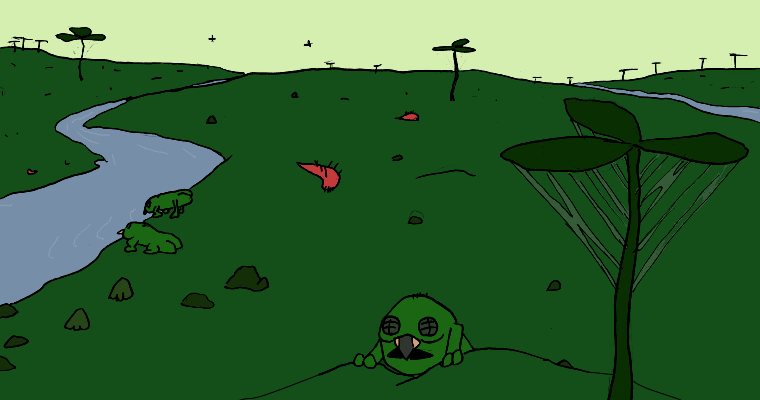 The slimelands: a continent-sized region where a super-thick layer of slime floats atop the ocean, strong enough to support an ecosystem on its surface. Here, a Heppoig pokes out of its mound beneath a mucus-covered plants to look around, while others of its pack take a drink from a nearby stream. Sekuoarmil wander the area, and some Huthchoo are hidden among the blobs of slime. 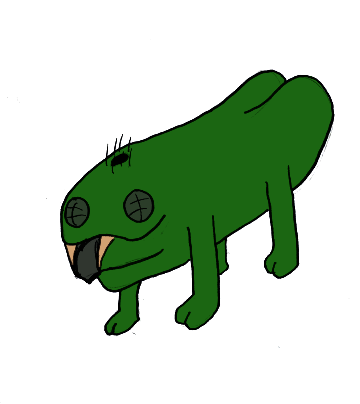 Heppoig are a type of Ekkpay, related to the Aunip found in cities all over Gurx, and we should at last examine that group more closely. Ekkpay use their top four limbs to move in a quadrupedal manner, while their lower limbs are short stumps on the rear of the animals that they use to slap on the ground for communication (they hear through their feet and bottom side), or to slap together and create a large sound that might scare predators. This is why the closest translation to English for the word “Ekkpay” would be “Clapbutt”. Heppoig specifically are a type of Ekkpay that thrive in the slimelands, using their beaks to burrow tunnels into the slime. But unlike tunnels built in dirt or soil, the slime is constantly trying to fill them in again, so the Heppoig work together in packs to maintain their living space. They can even allow the tunnel entrances to grow closed again for extra protection. 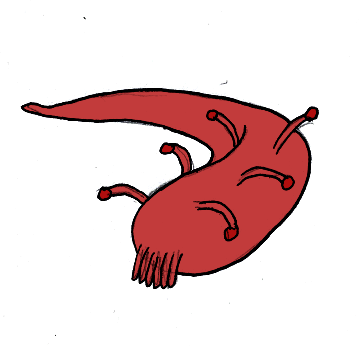 The Sekuoarmil can afford their bright red colour because they are highly toxic. No predator in the slimelands would be stupid enough to eat one. And so, Sekuoarmil are free to wander the slime, living off the waste of other creatures. At the end of their lives, the Sekuoarmil head to the water to lay eggs and die. 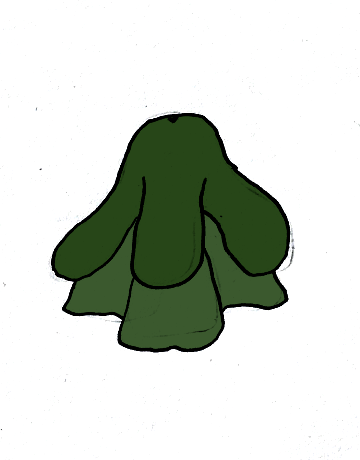 Hidden in the scene above are some Huthchoo, a type of Vootuph that has adapted to life in the slimelands by developing a hard shell that resembles a blob of slime, and so goes ignored by predators. The slime that makes up the pseudo-ground beneath them is largely the dead slime cells which have been forced to the top, but the Huthchoo have long, piercing tongues that poke downward and absorb nutrition from slime over a metre beneath the surface. Incidentally, wind can be harsh in the slimelands (as well as dust storms if it has been dry and the top layer of the slime begins to flake off), so the tongues of the Huthchoo also allow them to anchor in place during such events.