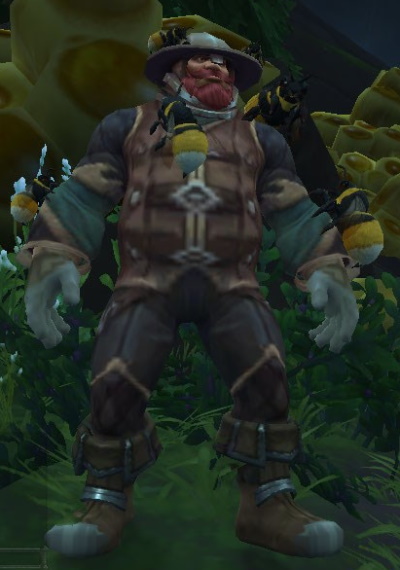 We haven’t, to date, had the best of luck with Beekeepers who live in fantasy videogame realms. It’s a shame, because some of our highest-ranking Beekeepers come from fantasy novels. But in games, the Beekeepers are always there to just beg for the help of the players. Apiarists in Distress, as I have said before. So I didn’t expect much of Barry, a Beekeeper found in the world of World of Warcraft. But there are always surprises in reviewing Fictional Beekeeper.

To be sure, Barry is another NPC who will set the player off on quests and stuff, but it isn’t because he needs help. All indications are that Barry’s own beekeeping operations are doing just fine without any help from the player. Instead, Barry gets the player to help out with another colony of bees altogether. It turns out that there’s a new hive in the valley, giant bees have arrived from places unknown, and Barry tells the player about it. When the player finds the hive and the bees are ready to defend themselves, Barry steps in and brokers peace between the player and the bees of the Honeyback Hive. You see, Barry can speak the language of the bees fluently and he’s not about to let the new bees (or the player) waste their lives in combat. After that he seems to operate as a freelance translator between the bees and the players, in spite of the fact that the Honeyback Hive isn’t even his own hive. He’s doing extra beekeeping on the side of his own.

Barry seems like a nice guy. Very genial and none of the telltale signs of Beekeeper Rage. His bees are extremely large, if not the size of the newcomers. And he loves his bees and they love him back/ And he loves the Honeyback bees as well, enjoying petting their fuzzy thoraxes. As for supernatural or combat prowess, Barry seems about standard for a denizen of Azeroth, a place where magic and combat are ubiquitous. It’s a world where a Beekeeper needs to be extra careful because you never know when a honey-crazed mauler is going to turn up. We can only infer that if Barry is successful in this world, he’s got the skill to back it up.

4 Honeycombs out of Five. He’s standout in videogame NPC Beekeepers.