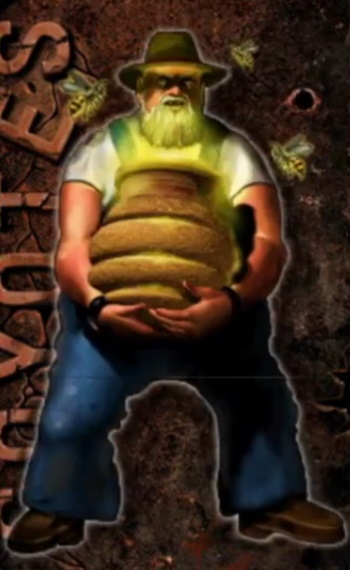 We’ve seen Beekeepers who use vehicles for their beekeeping before (Doc Beebles’s truck comes to mind.) But today’s Beekeeper is a character from the game series Vigilante 8, so he spends most of his time fighting in his truck. He is called Beezwax and he’s definitely given into his Beekeeper Rage.

He had been a farmer until his farm was polluted with radioactive waste from a nearby government testing facility. After that, “Beezwax packed up and hit the road in a rage of madness” and sought revenge on those who had wronged him. As is so typical when a Beekeeper goes bad, the justification is sound, but the response is too much and they go evil. In his mentally unstable state, Beezwax encounters the leader of Vigilante 8’s villains, a man called Sid Burn, and starts thinking he is a prophet. Beezwax sides with Burn and his villainous team and we lose another Beekeeper to the bad side.

It seems like Beezwax’s quest for revenge becomes a little unfocused when he joins the villains. He continues finding things that piss him off, such as when he sees ski resorts taking over his hometown, but I doubt Syd Burn is as concerned with nuclear waste dumping as Beezwax ought to be. Perhaps it is the justice of the bees then that, in one of the endings in which Beezwax wins the game, his acquisition of some nuclear warheads goes awry when one of his bees sets off the bomb, presumably killing Beezwax. 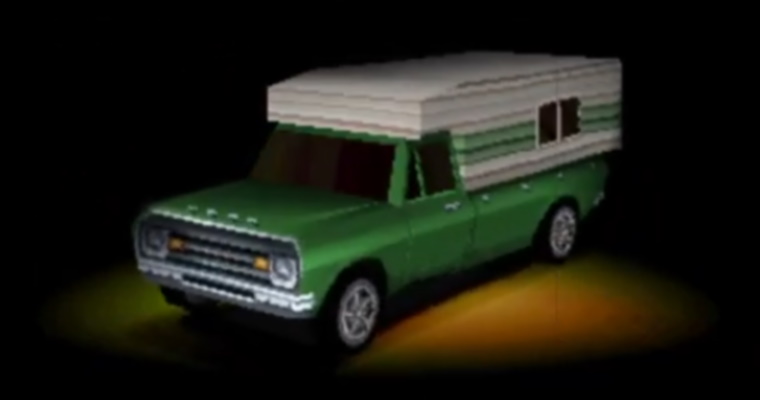 Beezwax has a pretty sweet thing going here. Just having a mobile apiary is impressive, but this truck is equipped with all manner of other gadgetry that can help in a fight. Guns and rocket launchers, for example. It’s considered one of the game’s more heavily armoured, but slower vehicles. A tank, I believe is the term for this sort of setup. But it isn’t just the truck! The bees themselves have been mutated into a “Gamma Swarm” by the radiation. They seem larger than average and can be sent out of attack Beeswax’s enemies.

If only it had all been in the hands of a more well-adjusted Beekeeper. If someone had the same origin, the same setup, the same powers, but hadn’t given into a destructive spiral of anger, that would have been one awesome Beekeeper.