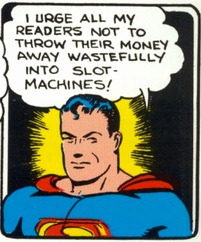 If I were to ask someone to describe Superman’s mission, by which I mean what he fights for or what he represents, that sort of thing, I expect the answers would come in two main flavours:

The first answer I’d expect is: Truth, Justice, and the American Way

Now, the American Way part of that gets controversial at times, mostly because it fluctuates so much more than the other two. But even as a Canadian I’ll say that if you show me an America that represents the other two, I’d have no real problem tacking that descriptor to Superman (I’m not seeing enough of that America these days). Truth and Justice, though. Those are exactly what I want in my Superman stories.

Clark Kent is a journalist. It’s often been said that he does that job so he is among the first to learn about disasters and stuff that may need Superman’s attention. That’s fine, but it ignores the fact that journalism is a vital force in the fight for truth and justice. More than being a vigilante, I’d say.

The other answer I’d expect is that Superman represents Hope. This is propagated as text pretty often in more recent stories (the recent Justice League movie is a big example of this). I think that a lot of fans buy into this one. I sure don’t.

At a basic level it sounds good. “The world is bleak and full of bad things and it is easy to lose hope, but don’t! Superman is proof that things can change!” but I don’t care for that. It very much places Superman in a space above those he is saving, like some god or a force of nature. One of the big complaints about Superman from people who dislike the character is that Superman can just sweep in and solve everything, and this take on the character caters to exactly that.

But I don’t like seeing Superman above those he is saving. Clark is a part of humanity (if not literally human), so when he fights to save the world, he isn’t a benevolent god reaching down to help, he’s a person standing up to help. Clark isn’t hoping for a better world. He’s acting to create a better world. If he is an inspirational figure (and I admit he should be), I don’t want him just to inspire people to sit around hoping Superman shows up. I want him to make humanity rise to action alongside him.

If I had to sum up Superman in one word like that, rather than Hope, I’d choose Action. It works on multiple levels. It implies that Clark represents the antithesis of that “Evil triumphs when good men do nothing” scenario, he acts to do good. It implies the exciting scenarios that the franchise should provide in its stories about Clark doing that. And also, Superman first appeared in and continues to appear in Action Comics. I don’t know what Hope Comics is doing, but Action is doing Superman. And vice-versa.

So those are the basic answers I’d expect for the What Is Superman About question. A third thing that would come up, though not as quickly I don’t think, is a discussion of power. Superman is undeniably a powerful character. That’s why people are always so quick to treat him like a god. I think his power is mostly overstated by those who see it as a bad thing, but I’ll get to that in some later article. But I think it is an important part of the character. Now, I don’t want to move into space that is now considered Spider-Man’s turf, but look at this exchange from the Superman serials decades before Uncle Ben came along:

Pa Kent: “You’re different from other people. Your unique abilities make you a kind of superman. Because of these great powers, your speed and strength, your x-ray vision and super-sensitive hearing, you have a great responsibility.

Clark: “I know what you’re going to say, Dad. I must use my powers wisely and justly.”

Pa: “Yes, you must use them always in the interests of truth, tolerance, and justice. The world needs a man of such extraordinary capabilities.”

I think Pa’s words speak for me. Now that I have presented my evidence, I shall sum up what the concept behind Superman stories ought to be in a single paragraph:

“What if there were a person with great power and the desire to improve the world? They would seek out the untruths and injustices in society, and act to change them.”

It’s a pretty simple sci-fi scenario and allows for a lot of social commentary and so on. And that’s the ideal I will be building toward in my future Superman Thoughts. Hopefully they won’t all be as long as this one.