“You see, my friends, through the centuries, man has sought to master the bee. And although she has shared with him most generously her produce, the bee went about her daily toils obeying not the commands of man, but the laws of her own civilization and culture.” 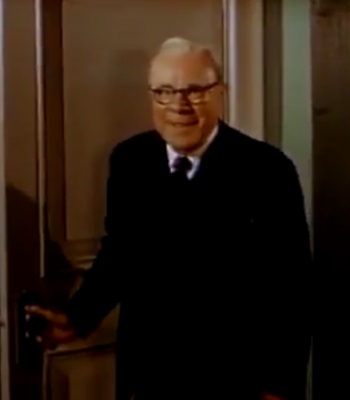 Dr. Lorenz (portrayed by Edmund Gwenn) is an elderly chemist who, with an assistant named George, lives in a house in a swamp near some small town called Dexter. There, in addition to farming honey, he conducts experiments with the help of his bees. The primary invention that benefits Lorenz’s work is a method for communicating with bees via “controlled use of artificial ultra-violet rays” that has allowed him to completely understand the bees’ language. Lorenz has shown nothing but respect for the bees, and they in turn like him and are happy to help him out.

Beyond that his experiments have been more along lines that one would actually expect from a chemist. He is working on a curative form of royal jelly which can heal even the most serious of wounds. While Lorenz is not a medical doctor, the townsfolk around the swamp apparently are confused by his “doctor” title and often summon him for aid in times of medical emergency. Lorenz is happy to help, but will only use his special jelly in cases of life or death. But why doesn’t he use it to heal everyone? Why doesn’t he go public with his discoveries? Well, the tragedy here is that the jelly is still not perfected. Its healing effects are only temporary, and continued use of the jelly makes the subject deadly allergic to bees, a single sting being enough to instantly kill them. Until this can be improved upon, Lorenz will only treat those who would be otherwise doomed, and whom he can keep a watch on. (Lorenz himself would seem to be at risk, but the bees would never have any reason to sting him.)

What else? Lorenz is not a fighter, but when a man breaks into his home and tries to steal from him, he does release the bees, which is an accepted beekeeper combat technique of course. Furthermore, he is a quirky fellow and, for some reason, he goes to bed at 8:30 on the dot every night, even if he has to leave a conversation unfinished to do it. We’re never given a reason for that, so I could easily claim this routine is his way of keeping his Beekeeper Rage from flaring up. It is, if nothing else, impressive how he can apparently tell the time without the need for a clock.

Eventually, knowing that he is getting too old to see his research to the end, so he leaves his work to a doctor named Fred Garner. Let’s hope that Fred is able to perfect the curative jelly one day.