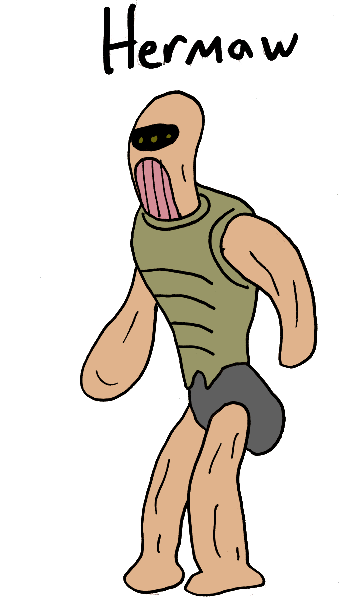 Himterons are a species that have strong shells, out of which come four goopy limbs that they can shape and stretch at will. Their head is similarly stretchy, though less so because it has to contain their complex ocular system and mouth-filter. The brains and vital organs of a Himteron are behind their shells. The variations in color on their “torso” shells are achieved through artificial dyeing, done to represent an individuals place in the caste-based society.

The Himteron homeworld, called “The First World” in their language, is located in the densely populated galaxy known as the Circle. Some time ages ago, the planet was attacked by an advanced race who raided the world for resources, the left. Though it did cause much damage to the species at the time, it also helped them become aware of and grow into the galactic community. The Himterons are a tight-knit group, they don’t spend a lot of time with other species when they can help it, but they are also not usually at odds with those other races either. 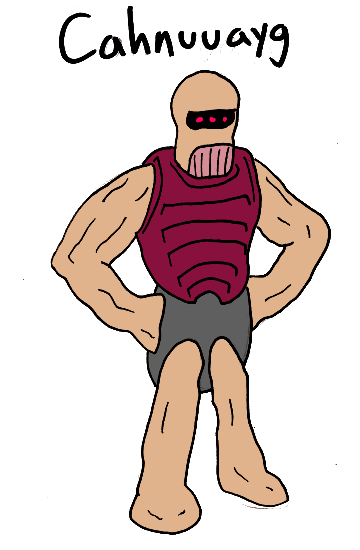 Hermaw is a soldier in the Royal Himteron Fighting Force. Trained in ground combat, Hermaw is a lot more likely to have to fight his own kind during planet-based skirmishes than aliens, but nonetheless, Hermaw has a distaste for other species. There haven’t actually been that many aliens that have shown up in Hermaw’s life, but still. They look different. That makes Hermaw uneasy.

Cahnuuayg is a result of a breeding program that has been running for dozens of generations to create Himterons superhumanly skilled as exorcists. Although extradimensional beings are not a common occurrence in the Circle galaxy, Cahnuuayg and a handful of others are employed by the Himteron government to make sure they remain a rarity by travelling to any planet willing to ask for help with potential demonic entities. Cahnuuayg has personally been on more planets than any other Himteron. 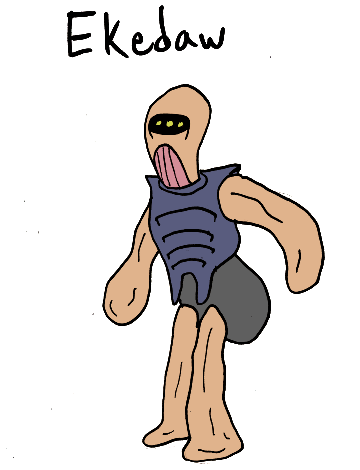 A member of the entertainer caste, Ekedaw has been training to make humorous comments about the appearance of audience members. This can be risky, because if the audience is offended, they can challenge the comment-maker to a duel. Ekedaw has to find the right thing to mock that even the victim will laugh about it. Himteron laughing sounds like hissing, by the way.

A Fact About Himterons: In Himteron culture it is considered very rude to watch someone who is carrying something. It’s fine to glance at them, but to actually watch their progress is just a jerk move.