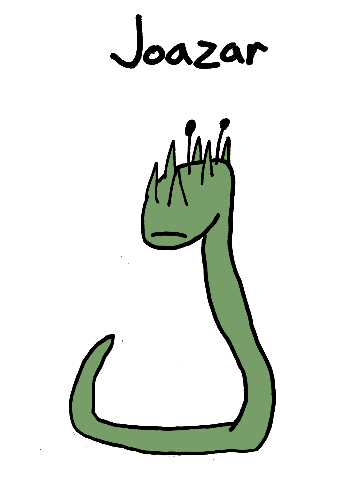 Originating on the planet Nodeela, the Nodeelan are a snake-like species that has spread throughout the galaxy known as the Circle. In the history of the species, more Nodeelans have been born on the many scattered worlds of the Circle than were born on the planet Nodeela. The species still remembers the world of their origin, they are still named after it after all, but most have never been there and have no intention of ever visiting. Nodeelans love to travel to other worlds, even resorting to stowing away on space vessels when more legitimate travel plans are hard to arrange. The Nodeelans are much more flexible than Earthly snakes and can manipulate technology with their bodies. Their eyes grow on stalks from their heads amid spikes that also grow there a protection for the eyes. 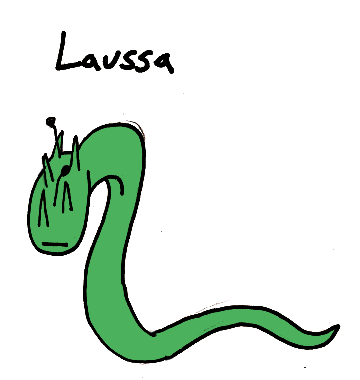 Joazar is part of a law-enforcement crew that is tracking down the Feral Pirates of the Circle. Joazar and a motley crew of aliens from various species pose as lowlife traders to get into seedier parts of the galaxy for information, but so far the Pirates have remained one step ahead.

Laussa has wound up in a bad situation. Having stowed away on an exploration ship, Laussa got off the ship while they were visiting a strange world. Unfortunately, Laussa was not on board when the ship took off again, and it turns out that the world has no life forms that had developed space travel. Now stranded on this primitive world, Laussa occasionally tries to guide the life there toward developing technology, if not enough to get to space, at least enough that it might attract the attention of someone from up there. 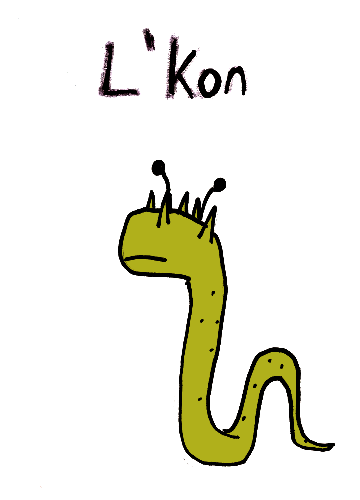 L’Kon is a young Nodeelan that has become the mascot of a Yurderrian Space Navy ship. The Yurderrians are a space-faring species who were driven from their homeworld by invaders and now wander the Circle in the hopes of finding somewhere new to live. L’Kon lifts the spirits of the officers on the ship by performing skits and singing songs for them.

A Fact About Nodeelan: While there is not much in the way of a shared culture of the Nodeelans, there is not very much genetic difference considering how widespread they are. Perhaps it is owed to their long lives and low rate of reproduction, but for whatever reason, there just has not been very much speciation among Nodeelans.