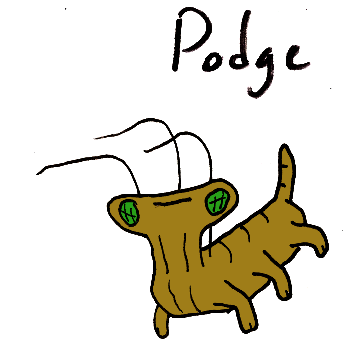 A small planet orbiting a dual star system is home to a small species that calls itself the E-Cobbo. Their world, which they call Oi-Tan, is a place of extreme seasons, with very dry and very wet phases alternating at a schedule we would recognize as almost monthly. But this chaotic seasonal schedule has not hindered the advancement of the E-Cobbo, who have adapted by building city-type communities that can transform depending on the type of weather they need to deal with at any given time. 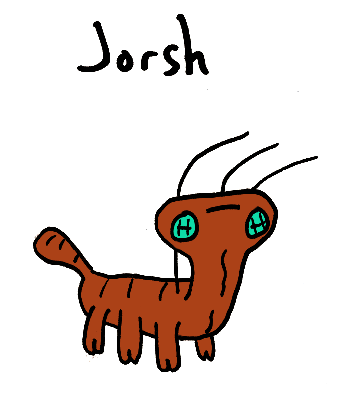 Podge is a crimefighter appointed by the priests of the E-Cobbo’s dominant religion. Although there is no actual police force on Oi-Tan, the priests in particularly crime-ridden areas (of which there are many) will choose individuals and declare that they have the right to hold authority. The result is an awful lot of lone-wolf-loose-cannon crimefighters, but Podge has a more By The Book type personality. Unfortunately, the book has yet to be written.

Jorsh‘s family was killed by careless criminals who were slaughtering their rivals and did not care what innocents happened to get in the way. The thing is, the E-Cobbo don’t value their family the same way that humans do. Jorsh’s family consisted of a set of five parents who were supposed to churn out children at a rate of one per year, and thus only spending a year with each one. Jorsh was that family’s first child, and had been released so they could raise other kids. That family is dead now, but it doesn’t make much of a difference to Jorsh. 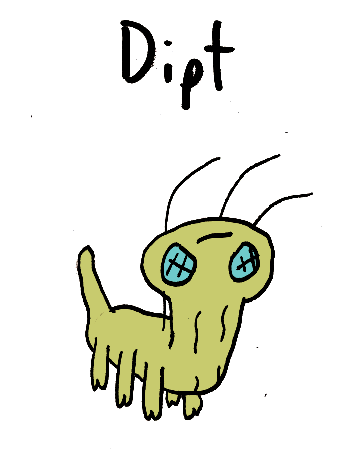 Dipt‘s favorite fruit bush was destroyed by careless criminals who were burning down a rival’s lair and did not care what innocent plants happened to be nearby. Having lost that bush, Dipt is now engaged in a quest for revenge, slaughtering as many criminals as possible.

A Fact About E-Cobbo: Although their economical system would be unrecognizable to humans, there are still a class of E-Cobbo who work “jobs” to be rewarded with food and shelter in a way similar to us. The most popular industry for this class is waterproofing. The second most popular industry is dust removal. The third is sneeze-inducing.