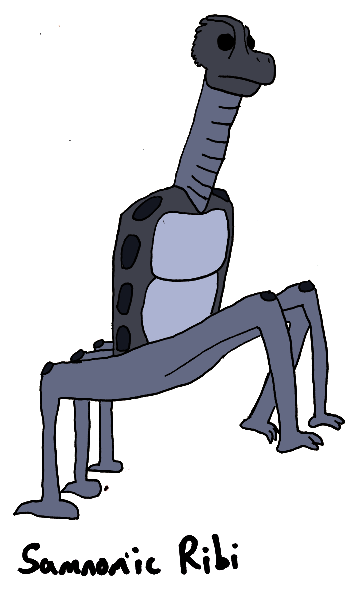 Members of the species that calls themselves the Strongnecked have, unsurprisingly, a big strong neck. They have no arms, but three of their six feet have little fingers that they can do things with. They are quite tall, standing almost three metres.

A spacefaring race that decided to remain neutral during the war against the Flartians, the Strongnecked now have a bit of conflict with their neighbours who fought so hard. Many of the other worlds think that the Strongnecked are cowards, or don’t deserve to participate in a community they didn’t sacrifice for, but the Strongnecked are trying their hand at diplomacy to make a place for themselves in the galaxy. Their world’s gravity is lighter than that of many nearby species, so when they visit neighbouring planets, they will often need supports for their legs. Their necks, however, do just fine. 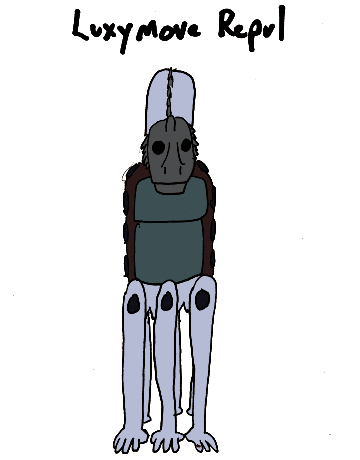 Samnomic Ribi is a neckfighter. Neckfighters bash at each other (like giraffes do) as a competitive sport. Samnomic is not a world-class neckfighter by any means, but makes a living and gets to travel. Is it worth the permanent damage that will show up with age? Let’s hope so.

Luxymove Repul is addicted to ice. For some reason, when Strongnecked places ice in their mouth and melt it with their body heat, it triggers some pleasant effects on the brain. The planet is so warm that ice can only occur by technological means, so ice addiction is rare. Luxymove is rich enough to get access to ice, but the addiction has ruined relationships with family members. 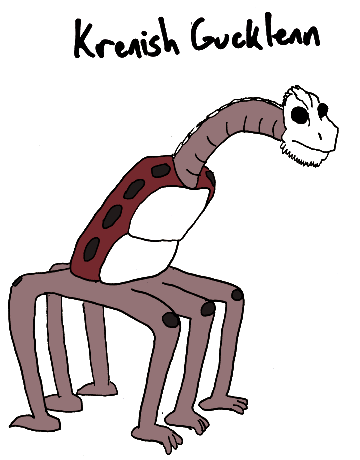 Krenish Gucklenn is a mentor whose job is to take on proteges and teach them the ways of the world. This is the most common form of education in Strongnecked culture. A mentor is supposed to only have one protege at a time, so they get the most attention that can be provided, but since mentors aren’t paid nearly enough, Krenish has been had three proteges going on at once! It has been a lot of work, and madcap business about hiding one protege around a corner from the other, but hopefully when it is all done Krenish will have the money save the family home.

A Fact About the Strongnecked: The Strongnecked are carnivores, and they love to take an animal carcass and cram their faces into its gut and root around picking out whatever the best organs are. It is pretty grisly by the standards of many other species, when they come up with their faces covered in viscera and blood streaming down their neck. At least, in this modern era, they know about hygene. Years ago, before first contact was made, they walked around with blood-stained faces most of the time.