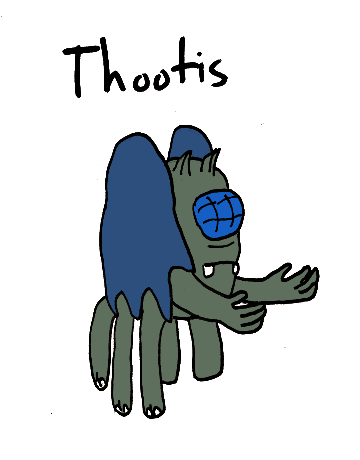 The Rezzaniaks are a five-legged, two-armed species with single large compound eyes. Perhaps their most distinctive features are the protective shells growing on their sides, which are leftover from the oyster-like form that is the first part of their life cycle. They have large ears that they can move about to focus on sounds, but no sense organ that gives them anything like our sense of smell.

Rezzaniak culture is made up of small communities, often isolated from one another by geographical boundries. When communities do grow to large and near one another, violent territorial spat can occur. Mostly, though, Rezzaniaks are peaceful. 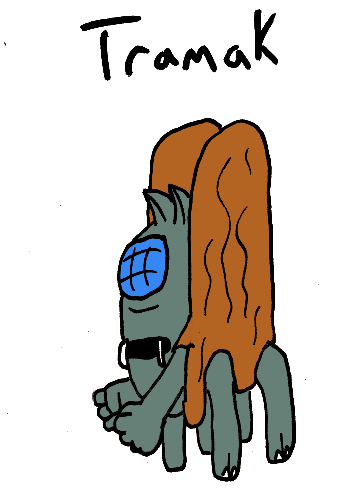 Thootis lives in a desert region in the planet’s northern stretches. Life is hard in that region, but the community there has adapted by living in tunnels and caves and digging wells for water. Thootis is a bit of a kleptomaniac, stealing from others in the community, but always feels guilty afterward. To prevent being discovered, Thootis usually throws the stolen goods down the wells.

Tramak could boast of being the first Rezzaniak to climb the planet’s highest peak. Living in a community near the largest mountain range, Tramak had seen the mountain in question for years and talked about wanting to see the world from that high. Finally, when the rest of the community tired of the topic and said “just go then,” Tramak did. Neither Tramak nor any of the others realize that Tramak was the first. There are fictional legends about people who climbed the mountain long ago, but that never happened. And most other Rezzaniaks just didn’t care about the mountain to think about whether or not anyone had been up there. Tramak could boast, if they knew. As it stands, the achievement will be forgotten. Tramak did enjoy the view, though.

Phordy is a collector of old furniture. Rezzaniaks like to sit on things that are similar to our beanbag chairs and their tables are almost exactly like ours. Phordy’s favorite pieces come from an era a few generations back when it was trendy to attach little colorful tassels to the furniture. They don’t do that on modern furniture and Phordy thinks that’s a shame.

A Fact About Rezzaniaks: Rezzaniaks consider singing to be somewhat taboo. It is something that should only be done, they say, between close groups. Only perverts would sing in public, and singing with someone you don’t know well is a sign of loose morals. Non-vocal forms of music do not yet exist for them.