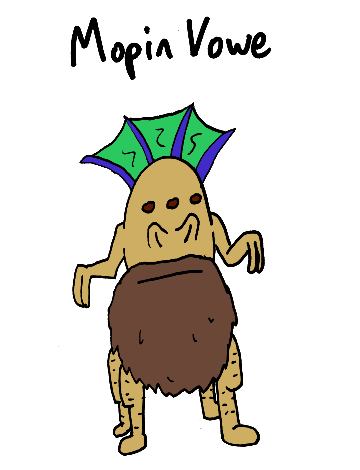 The species has four legs, with their equivalent of a torso positioned at what would be the back on an Earth-quadroped. In addition they have two arms positioned for dropping berries and such directly into the large mouths near the base of the torso. They also have three eyes and large nostrils. They don’t have any ears or other auditory organs, though, instead communicating by waving the colorful fans on their head.

Because they do not have an audible language, the names of individuals and places found in this entry are translated into the language of a nearby species called Toborians who are likely to make first contact with the planet in the near future. (And that contact will go better for the Toborians than for the Fanwavers.) 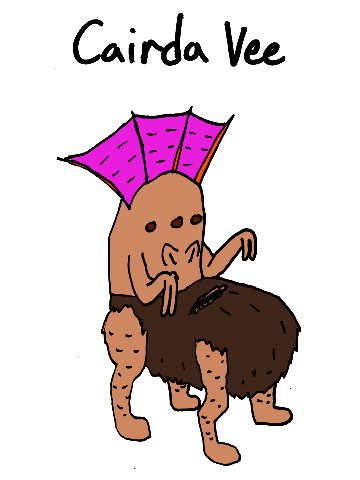 Mopin Vowe is a healer who specializes in the treatment of leg injuries. As with most jobs among the Fanwavers, Blot Ber was assigned this task after an election was held. When a Fanwaver declares that they want to serve their community in some fashion, the Fanwavers of the community vote for what job they think the individual should have, based on that individual’s skills and what the community needs. Mopin Vowe has so far done very well in the job.

Cairda Vee has survived being struck by lightning six times. There has not been any reason that anyone can think of why Cairda Vee should be struck so often, and most Fanwavers in that part of the world are not especially superstitious, but people are starting to wonder if there could be some kind of curse or something involved. 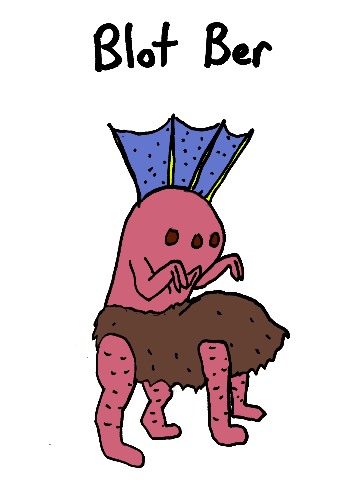 Some Fanwavers, such as Blot Ber, are born with an instinct to go into isolation. It’s strange, because you would think that instinct would have been bred out as they don’t produce offspring, but somehow these Loners continue to come into existence. Loners are not well respected among Fanwaver society, but some have contributed great things to the culture, such as works of art or scientific inventions that could only come from those who think outside the norm. Blot Ber has not yet contributed anything of value, but has certainly enjoyed the solitude.

A Fact About Fanwavers: The mating rituals of the Fanwavers involve the egg-layer creating a colorful, often jewel-filled, cave in which to wait for fertilizers to be attracted by the display.