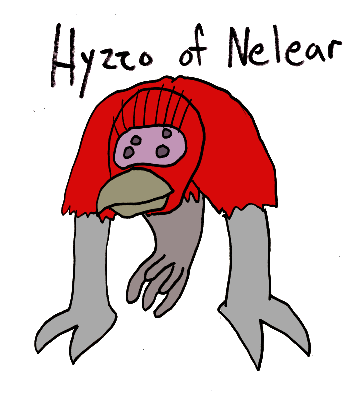 The Earks are a technologically-advanced race that are in the process of spreading across their star system. These bipedal, beaked creatures have evolved a hand-like appendage on their tails. Their feathery fur keeps them warm and they have big eyelashes that helps protect the massive eye-like organs on their faces. Their society is divided up into hundreds of states, most of which are ruled by families that claim to have been chosen by divine forces to rule. Eark language is made up of loud barking noises, though they have a second, more musical language that is used exclusively in scientific and mathematical phrases. 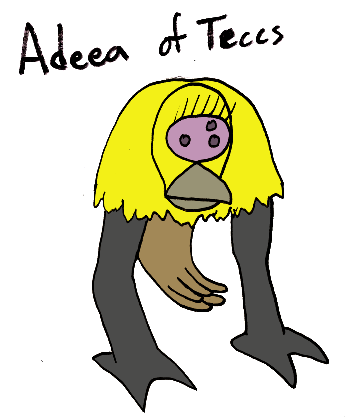 The Eark homeworld, which they call Rronk, is the third planet in the system, and the Earks have managed to colonize the second and fourth planets. Hyzzo of Nelear works as a cook on the space liners that travel between these three planets shipping goods and passengers. The nation of Nelear, Hyzzo’s home, is the location of the biggest spaceport on Rronk, and when the liner stops there, Hyzzo can get out and enjoy some downtime, but Hyzzo has not yet ever visited the other planets that the liner visits, only ever having seen them from orbit.

Adeea of Teccs is a part of the ruling family of Teccs. Earks are an egg-laying species and the state of Teccs has decided that to increase their global power, they need to increase their population. To that end, Adeea has organized a team of special operatives whose job is simply to create as many fertilized eggs as possible. 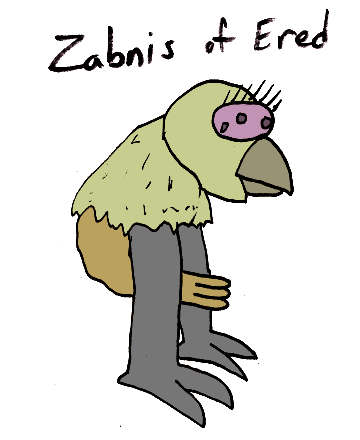 Zabnis of Ered is a technical support worker, whose job it is to maintain the technical devices in the state of Ered. If only there was a way to measure it, it would be known that Zabnis is the smartest Eark on the planet, but since no such measurement currently exists, Zabnis will continue to do menial support jobs.

A Fact About Earks: Earks enjoy a coffee-like beverage they call Con. The drinking of Con has become ritualized into Eark culture so much so that there are celebration of a young Eark’s first taste of Con and it is given as a gift at other special occasions.