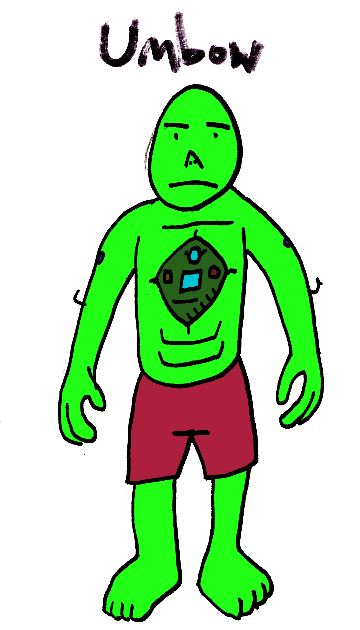 The Sopachoans are a humanoid species from the planet Sopacho. With hairless green skin and four digits per hand the Sopachoans seem fairly standard for a humanoid species, but at birth they are implanted with technology that grows with them, essentially making them robots on the inside. Their fusion of flesh and technology can be via the panels on their chest, but for the most part is as natural to them as a skeletal system is to us. One other feature of the species is the barbs that grow on their elbows. This is a vestige of a venom-distributing spike that the species had as a defense mechanism long ago, but they no longer contain enough venom to harm anyone. It is not uncommon for Sopachoans to have their elbow barbs removed if they get infected.

We have seen one Sopachoan before, in the form of Groff the bounty hunter. He first tried to capture the multiversal adventurer Jenny Everywhere, and after that failed he was forced to live in the desert where poor people live and got mocked by Little Choy. What a coincidence that he was always wearing something that covered up his computer panel… 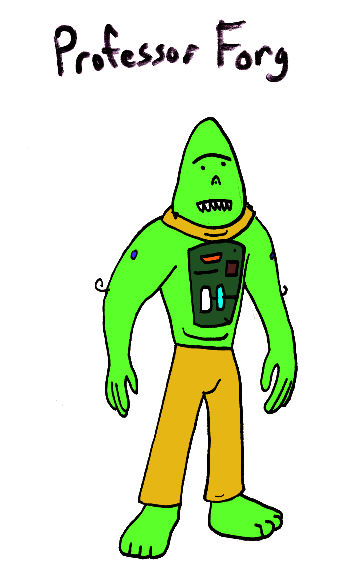 Umbow is an advisor to the Sopachoan government specializing in issues relating to interplanetary conflict. Generally, Umbow is in favor of such conflict. It keeps him employed, after all. If Umbow had his way, the Sopachoans would just be in a perpetual state of war with every alien planet that has ugly aliens on it.

Professor Forg teaches environmental theories at the university in the town where smart people go. Sopachoan professors are treated fairly well, given their own palatial estates with servants and luxuries that most of the world doesn’t have access to. This makes sense to them, since the professors are there to raise the intelligence level of the populace. Unfortunately, Sopachoans aren’t willing to spend money on financing the education of any but those youths who seem guaranteed to be successful, so there is not really much benefit to the process. But Forg sure isn’t going to complain about it. 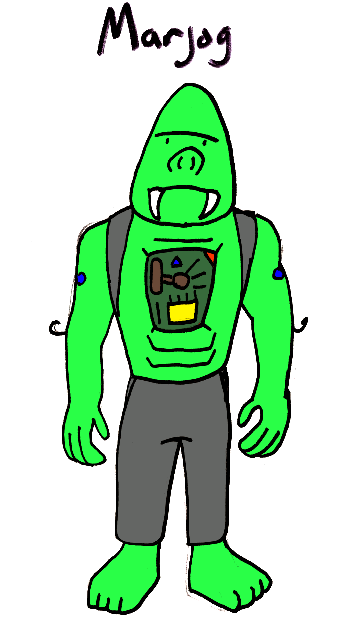 Marjog is a money destroyer. Sopachoans use electronic credits as currency and, to keep them valuable and rare across a planets-spanning society, the government pays people like Marjog to seek out unnaturally large accumulations of wealth and to delete it from existence. As could be expected, those who have the greatest wealth are usually able to afford means to protect themselves, but Marjog’s skills as a hacker are truly something to behold. Now the rich ones are just trying to have her killed.

A Fact About Sopachoans: For the first five times that the Sopachoans established a colony on another world in their system, they did it by taking a physical chunk of land from Sopacho and transporting it across space to the other location. Though they eventually gave up on that expensive process, it is still an important idea among their culture of bringing part of their homeworld to other planets.