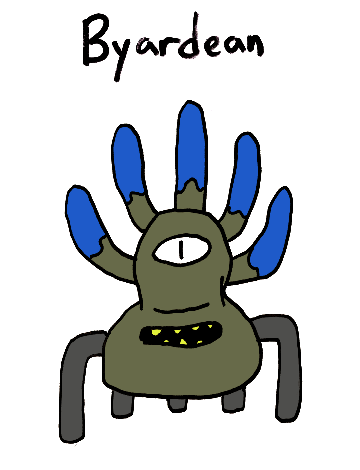 The Crent are a species with ten limbs, five used for locomotion that grow out of their back and five that grow out of their head and are used for manipulation of things. They have one large eyeball, which they can protect by closing up the “fist” around their head. Their diet consists entirely of plants and they have to be eating most of the time to get sufficient nutrition. The technological level of their society has only progressed to a level we would compare to our Bronze Age, though it has remained at that level longer than our Bronze Age did, and it is starting to seem like they have hit a ceiling on their technological development. There is not a lot of climatic variation on the Crent homeworld, so they’ve never needed to invent any sort of clothing to protect themselves from extreme temperatures or anything like that, but they have developed a technique of dipping the tips of their five manipulating appendages into wax so that it is coated and therefore less likely to be cut or burned when they do things with them. 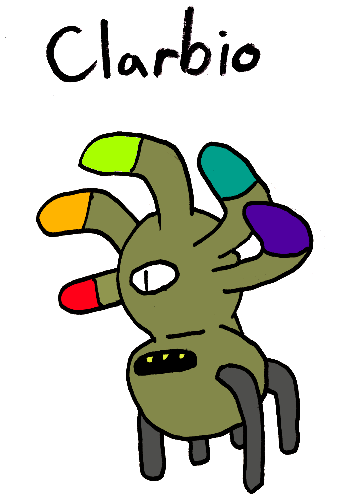 Byardean is a farm worker working in the fertile plains of the planet’s north. Farms in this region are owned by councils of thinkers who try to devise knew and better ways to produce plants and ship them around the world. Most farm workers swear to work for a thinker who is in some way related to them, but Byardean has sworn loyalty to a thinker who was once a rival to Byardean’s family. Strife between Byardean and siblings, coupled with an honest belief that the rival thinker’s operation is better, have made it the obvious choice to go against family history.

Clarbio is a big city type, living in the largest city on the planet. Simply residing in that location, Clarbio’s lifestyle is better than a lot of the rural locations. Only here could Clarbio make a living as an art critic. Perhaps the first person on the planet ever to be employed as such, Clarbio has made a study of all the various art styles that come through the city, which trades with regions all over the world, and has somehow convinced others to pay to hear Clarbios opinion. 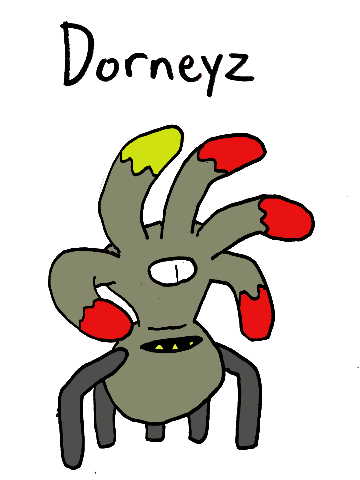 Dorneyz is a soldier in the largest army on the planet. In the planet’s southern hemisphere, a warlord has assembled this massive fighting force and conquered larger territory than any other ruler the planet has seen. Dorneyz is proud to be a part of this gathering of warriors and is, in spare moments, writing a “rules of engagement” style document that will be studied by historians for generations to come.

A Fact About The Crent: The fact that the species has stagnated at their Bronze Age-equivalent level should not be much of a problem for them, but for one thing: an alien spacecraft, manned by dozens of a technologically advanced species, has crashed onto an island not far from the largest continent’s northern shores. Though these aliens are in suspended animation now, who can say what accident may awaken them to be released on this unprepared world.