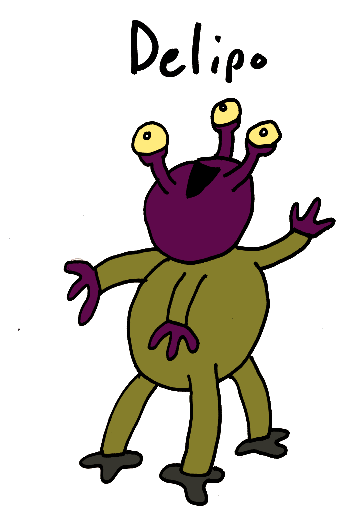 Hey, it’s nearing Halloween again. How am I gonna do some aliens with a spooky flavor this year? Something less ridiculous than Jack O’Spiders? We’ll how about if the aliens are the victims of the spooky stuff this time:

The planet Tirgal is under attack. The dark hordes of the Hated Dead have broken out of their underworld imprisonment and now the Skeleterrors are rampaging through the cosmos, and the unfortunate homeworld of the Tirglanes.

Tirglanes are a three-legged, three-armed, three-eyed species whose diet is comprised mainly of berries and nuts. They live in tight-knit family units in large stone structures, with the different families doing different jobs in the communities. If a community has any kind of leadership, it is generally a family that has proven themselves skilled as leaders. 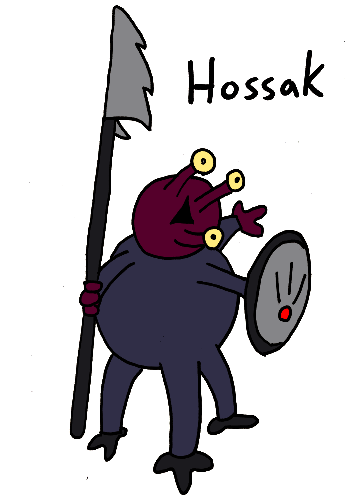 Delipo was a typical Tirglane citizen, living in a largish town with a family of garment weavers. But then the Hated Dead arrived and demolished the town, so now Delipo and family are refugees, seeking some place of safety in a world that has none.

Hossak is a warrior on the front lines of the battle against the Skeleterrors. Having served in a number of wars between cities on the planet, Hossak is a skilled veteran, but this fight against the cosmic undead is something unlike anything the Tirglanes have ever seen. Skeleterrors seem to be orbiting the planet, coming down in swarms whenever they have recharged whatever form of energy it is they use. Hossak and the other warriors occasionally do repel the attacks, but it is just as common for the Skeleterrors to just leave after they’ve apparently sated their desire for destruction for a time. Hossak is growing weary of seeing allies die, but refuses to stop fighting. 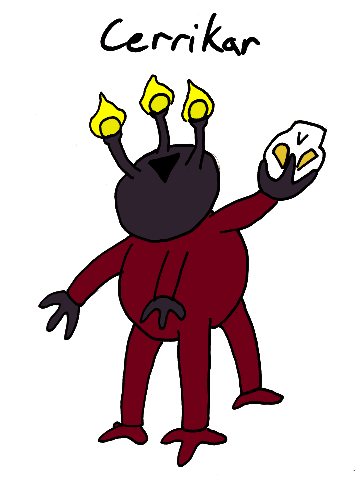 The figure of a humanoid skeleton should have no inherent use as iconography of death on a world with no humanoids, but it does now that the Skeleterrors have attacked. Cerrikar is a necromancer who uses the symbology of death to power spells, and has found that the use of Skeleterror imagery has unlocked a lot of new spells hitherto unknown on this world. But is this power worth the risk of the utter destruction of the planet? Cerrikar is not sure, but plans to keep using the power until a decision is urgently needed.

A Fact About Tirglanes: Occasionally albino Tirglanes are born and they are considered blessed. Usually trained to become travelling bards, they are rewarded handsomely for their services and treated as honored guests wherever they go. Though many Tirglanes memorize the poems that tell the history of their world, albinos are the ones who know the most.