I don’t know why I didn’t think to look into the Smurfs franchise for a beekeeper sooner. I mean, they have Smurfs for everything. And sure enough, this guy exists: 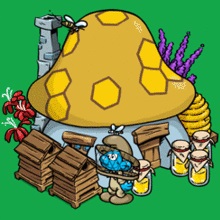 He exists, but just barely. Beekeeper Smurf appears only in a video game* called the Smurfs Village Game, which means that even the profile on the Smurfs wiki considers him non-canon. As such, there’s not much information. Here’s what I do know:

Beekeeper Smurf is already a Smurf, and lives in a world full of magic and adventure. But sadly, we have no proof that he has ever contributed to the magic or adventure in that world. He appears to just be a mostly decorative feature in the game, and mostly a non-entity in the village. The only very interesting thing about him is that his bees seem to be very small, judging by the size of his hives compared to his three-apples-tall frame. Even the two bees we see hanging around him seem too large for those hives, so either it’s tiny bees or he just has a handful of extremely efficient ones. That’s all we have. He’s got jars of honey, though, so whatever the case, it works for him.

*Full Disclosure: I didn’t bother the play this game. That sounds like I’m not doing my due diligence as the world’s foremost Fictional Beekeeper Reviewer, but I say the fact I spent half an hour researching this at all is a sign of my credentials.