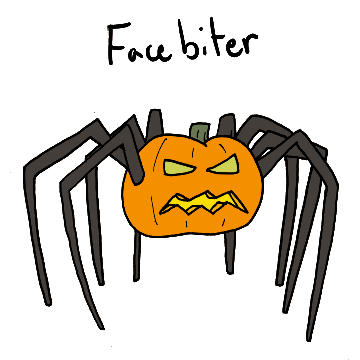 In the vastness of a dozen alternate universes, there are bound to be all sorts of strange coincidences. The odds are pretty high that a species would evolve that would just happen to look like a cross between jack o’lanterns and spiders, but with that many universes, even the unlikeliest events can be realized. Which is convenient because it allows me the chance to present this Halloween-themed alien species:

The planet has been called “Hellcaveworld” by other species, since the natives don’t have a spoken language. The caves of this world are home to the Jack O’Spiders. 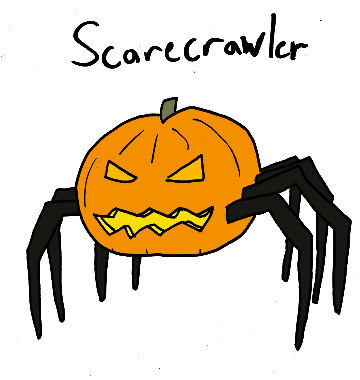 Facebiter is a fairly typical example of the species. Hellcaveworld is also home to numerous items that are useful in mystical rituals, so adventurers from other worlds often come here to plunder these goods (not to mention all the weapons and treasures dropped by other fallen adventurers). Jack O’Spiders like Facebiter hunt and kill these invaders.

Scarecrawler is another typical Jack O’Spider, but who is less likely to actively hunt the invaders. Scarecrawler will fight if cornered, but prefers to try to scare invaders away from caves where eggs have been laid.

Corpsestealer is too scared of the invaders to actually attack and kill them, but is perfectly happy to scavenge their remains. In this way, Corpsestealer has amassed a great collection of wealth in a deep cave, enough treasure that any adventurer who found it would be set for life. 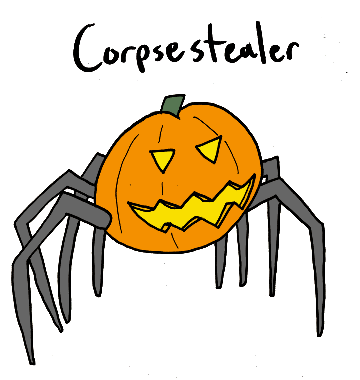 A Fact About Jack O’Spiders: The glowing mouths of the Jack O’Spiders evolved as a way for the species to illuminate their way in the darkest of caves. Their eyes do not emit a glow, but do reflect the glow of the mouth, thus completing the resemblance to our jack o’lanterns. In spite of this evolved trait, the Jack O’Spiders can actually see in the dark, so the cause for illuminating the cave may actually be to shock their prey who are confronted with the sudden appearance of a scary glowing face in the dark. I guess prey doesn’t like that.