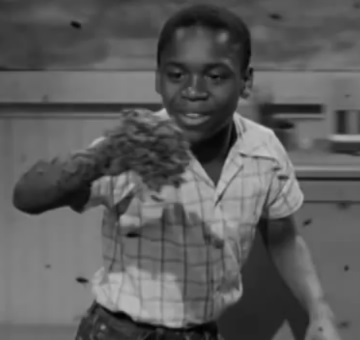 C.T. Young (whose initials don’t stand for anything) appears in the 1953 film Bright Road. C.T. is a troubled student who is singled out by Miss Richards, a new teacher who hopes to turn him around. Indeed, C.T. does not see the point of going to places like school and church, and when there he is completely unable to hide how much he doesn’t want to be there. It takes him two years to get through every grade and the old teachers have given up on him as a “backwards child”. But he isn’t a bad child. He doesn’t really associate with the other schoolchildren much, apart from his girlfriend Tanya, but he is extremely well behaved at home where he not only helps take care of the kids who are younger than him, but also uses the profits from selling his honey to do things like buy paint for the house. For Christmas, he even gives a jar of that honey, his only source of income, to his mother with a note saying it is “from the bees” and that’s pretty cute. C.T. loves other animals too. He has a dog named Come Here (who, incidentally, seems to be smart enough to warn him when he is running late for school), sings along with birds, and is fascinated by a caterpillar going into a cocoon which is a useful metaphor for his own story. Basically, C.T. is a very good child who just doesn’t fit into the usual schooling methods and that’s what Miss Richards sees in him. She recognizes that he is skilled at drawing and encourages him there. She also catches him helping another kid with math problems, proving that he may not care enough to do it for his own sake, but he’ll do it to help someone else. 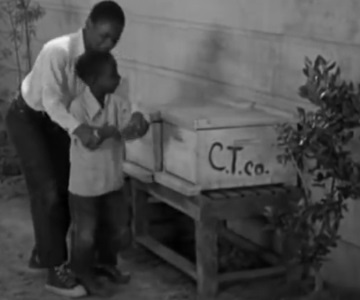 But I’m not here to review good children. Lets focus on the beekeeping stuff. Of the bees he says, “Me and them, we’re sort of in business. They make a little honey, I sell it.” It doesn’t sound like he makes a lot of money, but the fact he makes any is a good start. At the film’s climax, a swarm of bees comes through the open classroom window looking for somewhere to hive. C.T. is unfazed as he stops the other students from panicking or harming the bees, grabs the queen, places her in a jar, and carries her, his hand covered in bees, to find a nice tree in the woods where they can live.

Unfortunately, that is a redemptive moment for an earlier bit of Beekeeper Rage. Granted, it takes an awful lot for C.T. to work up to that moment of anger. His girlfriend Tanya dies of pneumonia, which is understandably something one would be upset about. Then, after he returns to school, having skipped for a while, he finds classmates singing the “Three Blind Mice” song, which has always upset him for its imagery of cutting off tails of the mice (he loves animals that much). He reacts to this song by grabbing a jump-rope and swinging it around as a weapon to lash out at everyone, then gets into a fistfight with another student.

I like my beekeepers to be good fighters, and though that C.T.’s only fight is a Beekeeper Rage moment is sad, he does acquit himself well. He is also able to take several hits on the hands with a ruler from the principal without flinching. And, though he is told he must apologize, he notes that, after he saved everyone from the bees, he was forgiven without needing to apologize. Way to get a moral victory, C.T.

For the record, the movie is based off a short story called “See How They Run” by Mary Elizabeth Vroman, but in that story there is no mention of C.T. keeping bees, so it is not canon here.